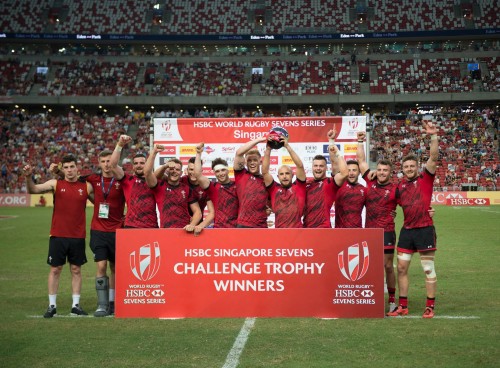 Canada beat the United States 26-19 to win their maiden World Series Sevens title at the Singapore National Stadium on Sunday in the first ever all-American final.

However, while the Hong Kong Sevens were played in a full venue a week ago, crowds numbers were sparse in Singapore.

Making a comeback after a nine-year absence, the Singapore Sevens last year drew a claimed 50,000 spectators over two days. This year, crowd numbers are believed to be around half that figure.

Crowd numbers had also been small for Super Rugby fixtures in Singapore this year.

The second home of the Tokyo-based Sunwolves franchise, just 7,142 fans attended the round five fixture against the Stormers.

The centrepiece of the Singapore Sports Hub, the 55,000 seat National Stadium was built to host major sport and entertainment events, as well as events surrounding the Singapore National Day.

However, while Singaporeans flock to see major touring football teams, such as the English Premier League's Manchester United, they appear less keen to back other sports, even with a team like the Sunwolves having a local connection.

In their first season, the Sunwolves attracted close to 30,000 spectators to their three games at the Singapore National Stadium but this it seems they will not achieve that number this season.

However, Sports Hub Chief Executive Manu Sawhney remains positive and is constantly on the look out to identify, secure and deliver a variety of genres and type of events that add to the vibrancy of the Sports Hub as well as Singapore’s sporting landscape.

He explains “since the opening of the Singapore Sports Hub in 2014, it has hosted close to 400 events, from sports to lifestyle and entertainment, such as the 28th SEA Games, 8th ASEAN Para Games, Barclays Asia Trophy and of course Super Rugby.”

World Rugby Chief Executive Brett Gosper is also enthusiastic about the venue, stating “the (Singapore National) Stadium is probably the top Stadium on offer among our 10 global destinations for the World Sevens Series.

"It is an amazing venue where people can walk around the circumference of the stadium but remain connected with the matches going on. This is unlike other stadiums, where you go outside and lose contact with the action.”

Image of the winning Canadian team at the SIngapore Sevens courtesy of Singapore Maven.