Rugby Australia has announced that it is aiming to host the 2027 Rugby World Cup, with Chairman. Hamish McLennan today revealing the formation of an advisory board to oversee the bid.

Recently elected as the body’s Chair, McLennan assembled the advisory board in the weeks leading up to his opening Rugby Australia board meeting, in an effort to bring the tournament to Australia for the first time since 2003.

McLennan said the seven-member board will be chaired by Sir Rod Eddington, and will include McLennan, former Australian Prime Minister, John Howard, and other captains of industry, each with a personal connection to rugby.

He advised “the 2027 Rugby World Cup is an incredible opportunity for rugby and for our country and we have signalled our intentions clearly by bringing together some of the greatest minds in rugby, politics, business, and the tourism sector to deliver a winning bid for Australia.

“As I announced after I first agreed to become chairman of the board, the 2027 Rugby World Cup bid was one of my top priorities and today we have taken a giant step towards laying the foundations for a successful bid.

“I’m delighted that Sir Rod Eddington has agreed to chair this very important advisory board on behalf of our 2027 Rugby World Cup bid team.

“I have known Rod for 25 years and he is one of Australia’s leading businessmen and a doyen of the tourism industry, who will lead this group of prominent Australians superbly.

“I am honoured that each of these incredibly successful individuals has agreed to get behind this important project.” 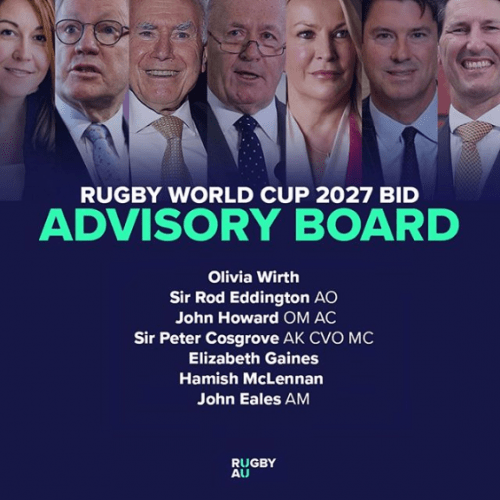 Advising that hosting the world’s third largest sporting event would be a great opportunity for rugby in Australia as well as the wider economy, Sir Road added “I’m very proud to accept Hamish’s offer to chair this advisory board and for the opportunity to help lead a project that the whole nation can get behind.

“I am also thrilled that my fellow board members see the tremendous opportunity that the bid presents for our country and for rugby.

“This is a terrific group of people who are all passionate about rugby and Australia.

“These are some of the finest leaders in their fields that Australia has ever produced, and now they are joining forces to help bring a tournament to our shores that will be transformational for the game and provide a huge economic windfall for the country.”

Images: Jonny Wilkinson kicks a drop goal to secure the 2003 Rugby World Cup for England when Australia last hosted the tournament (top) and the advisory board that will oversee Australia's bid to host the 2027 event (below).