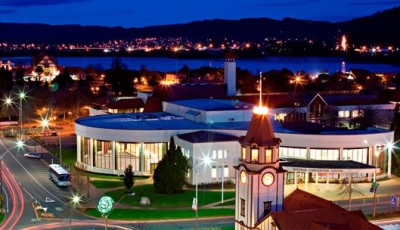 ‘Celebrate 75’ is a community variety concert being held at the Civic Theatre on 17th July and the council is seeking expressions of interest from community members and groups wanting to be part of the gala production.

The concert will be a celebration of the performing arts over the past 75 years - from the 1940s through to today - with each era highlighted in 10 minute performance sections.

Originally known as the Regent Theatre, the Civic Theatre was opened on 26th July 1940 at an official launch attracting more than 1,000 local residents.

Council Creative Communities portfolio lead, Councillor Glenys Searancke, said it was fitting that the council was opening the doors of the Sir Howard Morrison Performing Arts Centre to the community, to celebrate such an important milestone.

Councillor Searancke explained “the Civic Theatre is a much-loved community facility and this celebration will be a genuine partnership between the council and local residents.

“Over the generations we’ve watched our kids growing up on the Civic Theatre stage, so it holds a special place in the hearts of Rotorua people.

“We’ve also watched some of the country’s and the world’s stars – like Dame Kiri Te Kanawa, Paul Potts and the late Rob Guest, and of course our own Sir Howard Morrison for whom the wider complex is now named.

“‘Celebrate75’ will provide an exciting opportunity for local singers, dancers and other entertainers to showcase their talents to the community while celebrating the big birthday.

“Performers will have creative licence to produce a 10 minute bracket from the era of their choice. It could be a 1950s rock ‘n’ roll tribute, or a 1970s dance routine from Grease or the 1980s Fame phenomenon, or something more classical – the options are endless. It’ll be a truly spectacular event to celebrate one of the city’s most respected entertainment venues, in true Rotorua style.”

Marshall added “the occasion of the 75th birthday of our Civic Theatre in July was just too good an opportunity to miss for a nostalgic presentation of our performing arts.

“So it was decided to focus this year on a big variety concert, while showcasing our district’s culinary achievements can be revisited a little further down the track.”