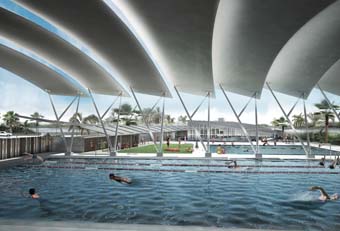 Commenting to The Morning Bulletin prior to the opening ceremony in November, Rockhampton Regional Council Parks and Recreation Committee Chair Councillor Cherie Rutherford said the planning, development and completion of the Centre was a united effort bringing enormous benefits to the local community.

Councillor Rutherford stated “this has been an absolute mammoth effort from our expert team of engineering and construction consultants. Council along with Federal and State Governments together contributed $17.8 million, and we've now produced a world-class sporting and recreation facility for our Region.

"The economic, social and sporting benefits are significant with 50 jobs created during construction alone, more than 20 positions after completion, and an estimated ongoing employment of a further 20 positions when aquatic programs are in full swing.

"Of course, the facility has already been a resounding success with more than 140,000 attendances since December 2014 - tripling from the usual annual attendance of 40,000 in previous years.

"It is already the place to be for the 'coolest' family day out during summer with the amazing water play park. And, there's no doubt it's the foremost training facility for our local and state swimmers, and in the near future will produce locally-trained Australian and world champions."

Images (from top): Shade cover over the Rockhampton World War Two (Southside) Memorial Aquatic Centre (courtesy LiquidBlu/Makmax) and an early design for the development (below).

9th June 2012 - GETTING THE TIMING RIGHT IN ROCKHAMPTON