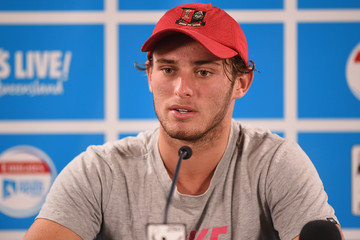 The 19-year-old appeared at LaTrobe Magistrates Court yesterday (23rd May) and, according to a report in The Australian, was handed a two-year good behaviour bond and fined $500.

He was answering a charge of corrupting the outcome of a sporting event.

The charge related to a match he played at the Traralgon Challenge Tournament in Victoria in October lasy year in which Anderson, the 2016 Australian Open boys' singles champion, lost the first set 6-4 before winning the next two 6-0 and 6-2.

The match was investigated by the Tennis Integrity Unit (TIU).

During the hearing, the Court was told Anderson had been approached by a friend about dropping the first set in his match against Harrison Lombe, also from Australia, who is ranked 900 places below him.

Victoria Police were alerted to the suspicious betting by Crown Bet when they rejected a bet of $10,000.

Another bet of $13,000 requiring Anderson to win was also rejected by the bookmakers.

Anderson was charged with the offence by Victoria Police in January and a month later he was provisionally suspended by the TIU.

This suspension is still in place.

A report from the European Sport Security Agency said that 45% of suspicious betting cases in the first quarter of 2017 were related to tennis matches.