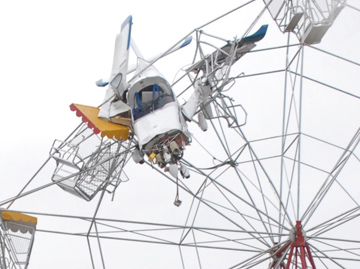 A woman has reportedly commenced legal action seeking $750,000 in compensation following an unusual 2011 accident where a light aeroplane crashed into a ferris wheel during the Old Bar Beach Festival.

The incident saw the light aircraft crash into a ferris wheel during the northern NSW Festival in October 2011. The plane lodged in the frame of the carnival ride more than 10 metres off the ground.

Two people were rescued from the plane, although their extraction from the wreckage took nearly three hours, while Amber Andell and her brother Jessie who were on the ferris wheel at the time of the incident were trapped for more than an hour before being rescued.

7News Sydney has reported that now aged 18-years, Amber Andell is taking action against the Greater Taree City Council, the organisers of the Old Bar Beach Festival and the aircraft pilot saying she now has an intense fear of show rides.