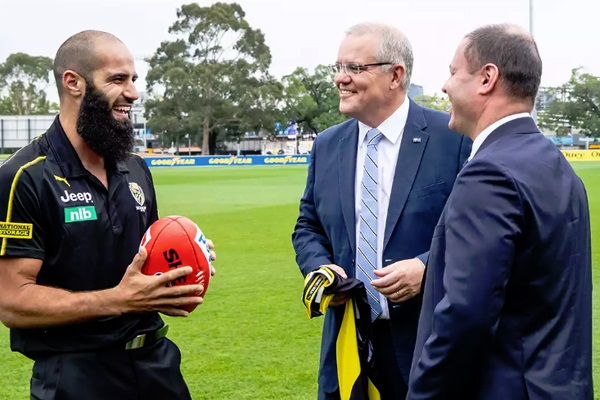 Richmond Football Club’s vision for a fully integrated, elite training and education hub at the Swinburne Centre is a step closer to reality after the Federal Government announced a $15 million commitment to the project.

During a visit to the Club's base last week, Australian Prime Minister Scott Morrison and Treasurer Josh Frydenberg announced the Federal Government support at the Swinburne Centre. Central to the redevelopment is the establishment of the William Cooper Centre, to support community programming and women’s AFL.

Following the announcement, Richmond Chief Executive Brendon Gale advised "we believe football clubs have the capacity - and responsibility - to bring people together, to bind and strengthen communities. We sincerely thank the Federal Government for sharing our vision.

“This facility will broaden and deepen Korin Gamadji Institute programming, strengthen our partnership with the Melbourne Indigenous Transition School (MITS) and provide a permanent home to the Bachar Houli Foundation, cementing the legacy of a great Australian.

“Significantly it will also provide the administration space and facilities to enable the delivery of exceptional men’s and women’s football programming. Today is a very significant step forward and we will now continue to work to source the remaining funding required to bring this $60 million vision to life.

“I would like to acknowledge that announcements like this would not become a reality without the many important partnerships we have developed with organisations and communities. We thank each for the guidance and support they have provided us as our community activities have taken shape.”

“This Centre encourages inclusion, promotes understanding and will empower young Australians from a diverse range of backgrounds to achieve great things. We’re building on our plan for Australia’s population with projects like this, by helping promote stronger ties within our communities.

“It will serve as an enduring legacy for its namesake William Cooper, who was one of the leaders of the NAIDOC movement, and has inspired generations of Indigenous people to follow in his leadership.”

Treasurer Josh Frydenberg said the Federal Government’s investment would ensure that more young people could share in the benefits of important programs without the constraints at the current facilities.

He added "we understand that initiatives like the Korin Gamadji Institute, the Bachar Houli Academy, MITS and increasing women’s participation in sport play an important role in the social and economic success of our community."