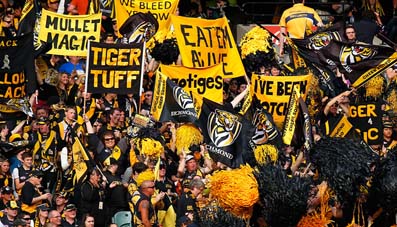 The Richmond Football Club has finished the home-and-away AFL Premiership season with an aggregate attendance of 1,024,751 – making the Tigers the top ranked club in AFL competition for attracting fans.

Richmond’s crowd of 69,104, in the final round match of season 2017 against St Kilda at the MCG, pushed its total attendance numbers beyond the one-million mark for the fourth time in the Club’s home-and-away history (1998, 2013, 2015 being the previous years).

The Tigers also topped the AFL table for home attendances throughout this season with a total of 615,542 attended their home games, at a highly-impressive average of 55,958 per match.

Richmond also recently announced a Club membership record of 73,515 for 2017.

Commenting on the crowd numbers, Richmond Chief Executive Brendon Gale stated “these are fantastic numbers and again reflect the most loyal and passionate fans in the competition.

“The whole Club appreciates the support and I know how much it means to the players. They appreciate the opportunity to play in front of big crowds and at one of the best stadiums in the world.”