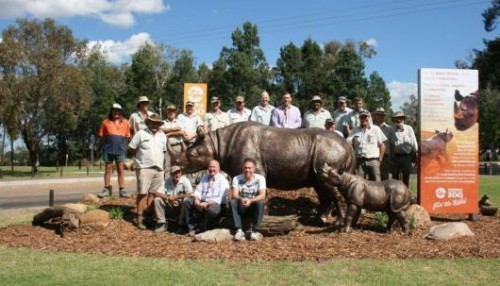 Ties between Dubbo and Taronga Western Plains Zoo have been commemorated with the unveiling of a statue of a Southern Black Rhino cow and calf outside the Dubbo's visitor information centre.

The bronze sculpture, weighing more than a tonne, was one of three crafted by Sydney-based sculptors Marc and Gillian Schattner. It was sculpted as a philanthropic gesture to the zoo after the sudden and mysterious death of a number of white rhinoceros about 12 months ago.

The bronze sculpture has two fibreglass twins, which are being placed at the zoo and the Dubbo regional airport.

The three sculptures cost $26,000 of which Dubbo City Council paid half, while also paying half of the $8,000 transportation costs.

Western Plains Zoo General Manager Matt Fuller said the Schattners only needed the cost of the materials to be covered and the rest they provided without charge, adding that the rhino subjects were based on two females that are part of the zoo's breeding program.

Welcoming the statue, Fuller explained "the zoo was synonymous with rhino protection and now, so is Dubbo."