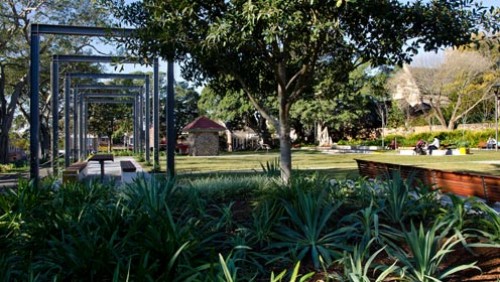 New landscaping and work to improve accessibility is currently underway as part of the second stage of the revitalisation of Foley Park in the inner Sydney suburb of Glebe.

Sydney Lord Mayor Clover Moore said the improvements will ensure Foley Park remains a focal point for community activity, stating "Foley Park is in the heart of the Glebe village and is an historic and important space for the local residents. This work will make the park more beautiful and enhance its purpose as a community village green, now and for future generations."

Residents and visitors will benefit from:

The landscaping and construction work is expected to be completed by the end of June, during which time about one third of the park will be fenced off while the landscaping works are undertaken.

Foley Park, at the corner of Glebe Point Road and Bridge Road in Glebe, is named after John 'Doc' Foley, a Glebe medical practitioner and local politician in the 1930s, and features a World War I memorial and historic brick shelter where residents once gathered to listen to the radio, the Wireless House.

This work follows a major upgrade completed in 2009 which included the restoration of the award winning Wireless House, a new playground and park furniture, new footpaths, lighting and more trees.

A third stage of minor works at Foley Park is also being planned and is subject to further communication and consultation with residents and park users.

Foley Park is one of 12 City of Sydney parks and open spaces that have been upgraded within the past 12 months and one of 65 to be revitalised over the past four years.