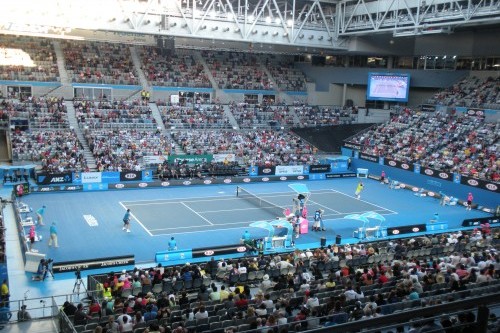 Melbourne Park is ready to host the biggest names in world tennis when the Australian Open 2018 starts next week.

The largest annual sporting event in the southern hemisphere, this years’ Australia Open will also feature an extensive entertainment program - including Australia’s own Jimmy Barnes and Tina Arena – along with a larger children’s zone.

Fans will also be able to enjoy world class food at the Rockpool Dining and Nobu pop-up restaurants as well as an array of new eateries and improved facilities in the revamped Rod Laver Arena.

Last year a record 728,763 fans poured through the gates and more than 900 million international and national fans tuned in to the Australian Open online and via television broadcasts.

The event creates more than 1,000 jobs every year and injects more than $280 million into the Victorian economy.

Successive Victorian Governments have back the Australian Open and its Melbourne Park home, with a further $271.55 million allocated in the Victorian Budget 2017/18 to complete the third stage of the Melbourne Park redevelopment.

The redevelopment will feature a new 5,000 seat show court arena, new function and media centre and improved patron facilities - guaranteeing the Australian Open will remain in Melbourne until at least 2036.

Looking forward to the event, Australian Open Tournament Director and Tennis Australia Chief Executive Craig Tiley stated “we are very fortunate to have the support of the Victorian Government, and with their help, the Australian Open now leads the world in Grand Slam facilities.”

Images: Australian Open action at the Hisense Arena (top) and plans for the third stage of the Melbourne Park redevelopment (below).