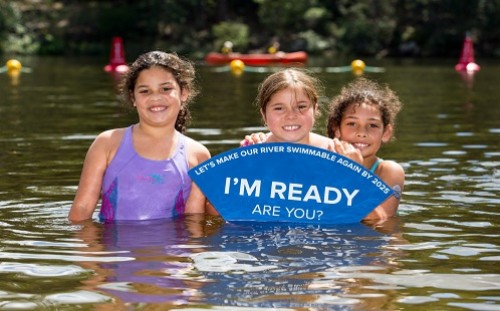 Due to Parramatta River recovering from decades of industrial water pollution and increased urban development, there is an urgent need to protect the endangered ecosystems and remaining native plant and animal species in the catchment.

Wright explains “what many people don't realise is, there are over 360 native species living in the catchment.

"These native species play a vital role in revitalising the ecological health of the river, therefore, improving its swimmability and creating a vibrant and active space for everyone to enjoy.

"The Parramatta River catchment is of great value to the community and there is surging interest in protecting the remaining natural qualities and species of the area. Collective planning and action is needed to protect the natural ecosystems and restore the river to its former glory."

To encourage Sydney's two-million western suburbs residents to rally and protect the most endangered ecosystems and native species, PRCG, whose members include 11 local councils, 8 government agencies and several community groups, is calling on the public to vote for their favourite mascots for the river from a list of species native to the area.

Jerome Laxale, Mayor of the City of Ryde and Chair of the Parramatta River Catchment Group says reinvigorating the river will benefit local residents and businesses.

Mayor Laxale explains "with the support of the community we can bring life back to one of Western Sydney's greatest environmental landmarks.

"Cleaning up the river will not only increase biodiversity and improve the liveability of the area, it will also generate real economic benefits, including increased property value and business opportunities for the local community."

This initiative is another step in the PRCG plan to bring the Parramatta River back to life and make it swimmable again by 2025.

The Our Living River Mascot competition closes on 13th July 2016 with the announcement of the winning mascots to be made during a community event on Saturday 30th July 2016.

For more information go to www.ourlivingriver.com.au