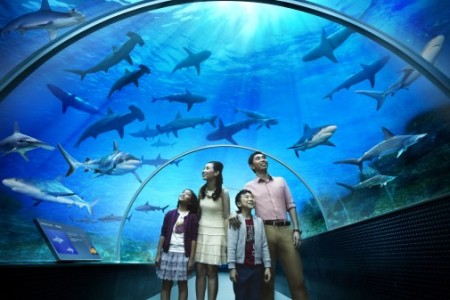 Opened at the end of 2012, the new marine attraction has been acknowledged by the Guinness World Records website.

S.E.A. Aquarium is currently home to more than 80,000 animals of over 800 species, housed in 42.8 million litres of water. Comprising 10 zones with 49 habitats, the Aquarium is the dry experience at the Resort's second anchor attraction Marine Life Park, and will eventually be home to more than 100,000 marine animals including hammerhead sharks and bottlenose dolphins.

The centerpiece of the Aquarium is the world's largest acrylic panel. Measuring 36 metres wide by 8.3 metres tall by 700 mm thick and weighing more than 250,000 kg, it offers a spectacular view of the cavernous Open Ocean habitat, which is home to some rare marine species such as the giant manta rays and goliath grouper.

One of the biggest challenges in constructing the world's largest acrylic panel was the bonding process, where a special bonding room had to be built on-site.

Resorts World Sentosa, Singapore's first integrated resort is located on the resort island of Sentosa. It opened in January 2010.

For more information go to www.guinnessworldrecords.com/records-1000/largest-aquarium