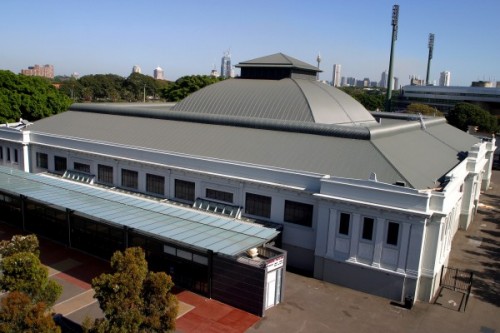 The NSW Government’s controversial plans to prioritise the rebuilding of Sydney's Allianz Stadium in Moore Park appear to be set for expansion to include the conversion of the historic Hordern Pavilion into an elite sport training facility.

According to the Guardian Australia, plans to redevelop Moore Park’s Entertainment Quarter, include the development of public spaces within the former Sydney Showground site, with a potential conversion of the Hordern Pavilion for elite sporting uses as well as plans for a multi-storey hotel.

The Hordern Pavilion has been a music venue for decades, hosting some of the most famous acts to visit Sydney, from Frank Sinatra to Coldplay. Also part of the site is the Hall of Industries known to Sydneysiders visiting the Royal Easter Show as the showbag hall until 1998, when the show was moved to Sydney Olympic Park.

In more recent years It has since been used for events, exhibitions and festivals.

According to Guardian Australia, the Hall of Industries will be converted into an elite sports training facilities for the Sydney Swans AFL team.

The leases on the two historic buildings, now operated by Playbill Venues, are currently being advertised by the Centennial Park and Moore Park Trust, with expressions of interest closing as of 21st December.

Playbill, Fox Studios - which operates the film studio on the site - and Carsingha, the company that bought the lease for the Entertainment Quarter in 2014, are understood to have lodged bids, with the Guardian suggesting that Carsingha is likely to be successful.

Carsingha paid just over $80 million for the lease and has begun rejuvenating the retail and restaurant precinct.

It also has more ambitious plans for the site including a multi-storey hotel on top of the current car park and a new bridge from the back of the SCG’s Trumper stand to the Entertainment Quarter.

When Carsingha bought the Entertainment Quarter lease in 2014, Director Gerry Harvey told the Sydney Morning Herald the potential for redevelopment was “endless”.

He advised “we - (Directors) John Singleton, Katie Page, Mark Carnegie and I - visited it a couple of times and realised it was hard to get 11 hectares with development opportunities and its location anywhere else in Sydney.”

Meanwhile, opposition to the NSW Government’s plan to spend approximately $2 billion on the rebuilding of Sydney’s ANZ and Allianz Stadiums is growing, with tens of thousands of signatures have been collected to oppose the plan.

Click here to view the  Expression of Interest to lease Hordern Pavilion and Royal Hall of Industries on the Australasian Leisure Management Tenders page.