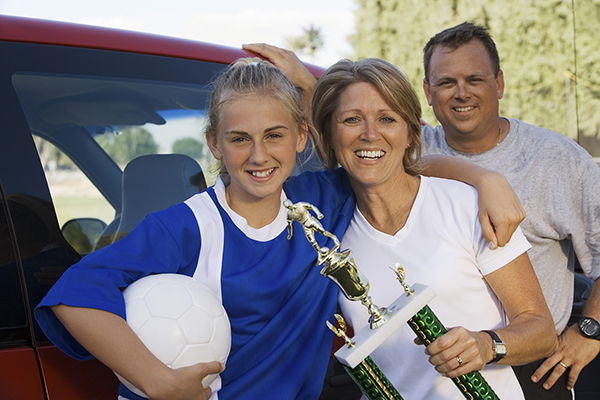 A new report shows the massive commitment that Australian parents and carers make to youth and children's sport, revealing that parents spend an average of 2.6 hours during the week and 2.5 hours at weekends involved with their sports games/training activities.

The Australian Active Kids Report, which surveyed 1000 parents with at least one child, also shows that respondents who spend time transporting their children to their sports games/training activities estimate a round trip would cover an average of 38.8 kilometres in a typical week.

These parents also have high expectations of their children with close to three in five (59.1%) of respondents thinking that their children could become professional athletes with the right support.

Overall, parents spend a staggering 418 million hours each year waiting on the sidelines of sporting games and practices - an average of 295 hours per year, per family. Regardless of this time, the research shows that the vast majority of parents (85.6%) acknowledge that sporting activities are an important part of their children’s lives, with nine in 10 parents (91.6%) agreeing that they have fun being on the sideline.

Three-quarters of parents are their children’s biggest fans, spending the time cheering on their little ones at games and practices (75.4%). For other parents, the hours are spent socialising, with four in five stating that they use the time to catch up with other parents (84.1%) whilst a third of Aussie parents spend the time game-side to get on social media (30.7%).

Support for children’s sport is a family-wide commitment, with fathers more likely than mothers to say they are happy to get involved in these activities (65.8% vs 51.4%).

Mothers are more likely than fathers to admit that while they are happy to get involved in their children’s sporting activities, it can get overwhelming or tiring because of continuous travel and time sacrifices (40.3% vs 29.1%).

The costs of this sporting endeavour saw respondents estimate spending an average of $533 for extra training, $409 for sports camps, $337 in joining clubs and $206 for equipment.

The following infographic explains details of the Report.

21st June 2014 - STAMPING OUT THE UGLY SIDE OF COMMUNITY SPORT