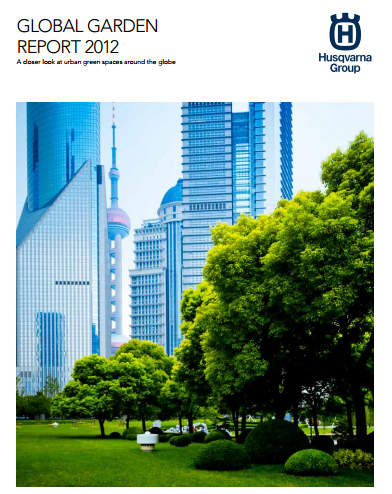 As the world's population is drawn to ever-growing cities, the importance of green spaces (and their health, integration and economic benefits) is increasing but pressures on these spaces are mounting.

The recently released 'Global Garden Report: A closer look at urban green spaces around the globe' from the Husqvarna Group confirms that urban green spaces have positive effects on people's health, in stimulating a city's economy, in raising community spirit and further social integration. As a result, the report stresses that maintaining public green spaces has never been more important.

Against a background of rapid urbanisation, the report highlights that, in 2008, mankind crossed an historic barrier when, for the first time in history, there were more people living in urban areas than in rural.

By 2050, it is estimated that over six billion people, two thirds of humanity, will be living in urban environments.

The Global Garden Report highlights that, as cities grow denser, green spaces are diminishing. In London they are lost at a rate of two and a half Hyde Parks per year, with the effect that the oxygen levels have gone down. The same trends can be seen in other places in the world, for instance in Ho Chi Minh City where the amount of green spaces has shrunk by half in only 10 years.

Husqvarna Group Head of External Communications Gunilla Gustavs explains "more people in our international study believe that the amount of green spaces in their city has declined over the last 10 years than that it has increased.

Gustavs adds "with this report, we at Husqvarna Group want to help raise awareness as to the importance of urban green spaces for our cities.

"Green spaces have several positive effects on ... wellbeing; both physiological and psychological. Hospital patients recover more quickly when they can see trees from their windows, and children living in urban an environment without greenery find it harder to concentrate in school. The study from Husqvarna shows that simply being outdoors in green spaces helps reduce stress and anxiety, and also encourages exercise."

Gustavs also highlights that a majority of respondents believed that they would exercise more if they had access to good green areas near home or work.

The Global Garden Report points out that as public places that everyone can enjoy regardless of background, parks and green spaces play an important societal role; they make neighborhoods more attractive, they contribute to the community spirit and they actually further social integration.

Green spaces play an important societal role. In our survey, 87% of all respondents believed that having access to a good green area could have a positive effect on the neighborhood or community spirit, and

61% says that they would pay more for a house or apartment that is near to good green spaces.

"Green spaces require a more regular upkeep in order to benefit the community, and in times of economic turbulence cities are more hesitant to provide ample funding and support. We must find a way of meeting this challenge. The combination of all of the positive effects that green areas have on a city and its population makes maintaining the green spaces a crucial task for the future."

Husqvarna Global Garden Report is an annual report about trends and current topics within gardening. This year's report is focused on the importance of green spaces within urban environments. The report is based on studies conducted in seven countries.

The full Husqvarna Global Garden Report can be viewed at http://husqvarnagroup.com/afw/files/press/husqvarna/Husqvarna_Global_Garden_Report_2012.pdf