Rekortan to be installed at Melbourne’s Lakeside Oval 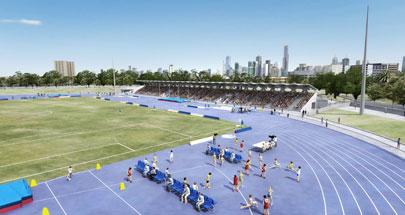 Athletes using the redeveloped Lakeside Oval in Melbourne's Albert Park are set to benefit from a recent decision to install Rekortan® M99 track surface at what will be Victoria's premier athletic facility.

Provided, and currently being installed, by Advanced Polymer Technology Australasia (APTA) subsidiary Sports Technology (STI), the track will be a key feature of the $50 million plus project being constructed by Watpac Construction and delivered by Major Project Victoria on behalf of Sport and Recreation Victoria and the Victorian Government

As APTA Managing Director Dr Martin Schlegel explains, the installation "is another vote for the international standard of STI's track performance."

The Lakeside Oval layout sees a break from traditional track surface colouring, with the facility to house a modern blue competition track, grey D-sections and separate, green warm up facility.

STI's involvement extends beyond Rekortan® M99 surfacing to include:

• Detailed design of the athletics track element of the project;
• Construction of critical track construction elements, such as the athletics equipment & track drainage channels; and
• Supervision and control of the asphalt installation process in accordance with stringent IAAF requirements.

The redevelopment of Lakeside Oval (previously the Bob Jane Stadium) is based on a conversion of the former rectangular stadium into Victoria's main athletics venue. When complete it will provide a new home for athletics in Victoria with the development of facilities for training and competition at all levels, and administration facilities for Athletics Victoria. The 1926 heritage grandstand is also being restored and will become the new home of the Victorian Institute of Sport (VIS) while the project will also support the current tenants of Lakeside Oval (the South Melbourne Football Club) through improvements to football competition and administration facilities.

The VIS facility will include a 50 metre indoor running track;, a 25 metre, four-lane recovery pool and a multipurpose sprung floor area while other features of the redevelopment include a new FIFA-sized natural grass pitch for soccer, new electronic scoreboard capable of streaming vision, upgraded field and broadcast lighting, and improved capabilities for TV broadcasts. The development will also see a new northern grandstand built opposite the existing grandstand providing a seating capacity of up to 7,000, while a grassed hill surrounding the track will boost capacity to around 15,000.

Works are due to be completed by February 2011 in advance of the Melbourne Formula 1 Grand Prix.

Click here to view an animation of the Lakeside Oval redevelopment..

For more information on Rekortan® M99 click here to contact Polytan via their entry in the Australasian Leisure Management Supplier Directory.

Image shows an artist's impression of the completed Lakeside Oval.