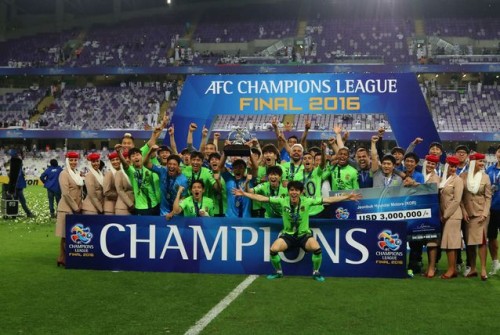 The Asian Football Confederation (AFC) has banned reigning Asian Champions League winners Jeonbuk Motors from the 2017 edition of the club tournament due to their involvement in a bribery scandal.

Jeonbuk, who competes in South Korea’s top flight K-League Classic, was docked nine points and fined AU$123,100 by the K-League’s disciplinary committee in September for payments a club scout made to referees in 2013.

The AFC said in a statement “Jeonbuk Hyundai Motors (KOR) are ineligible to participate in AFC competitions for the 2017 season due to its indirect involvement in activities aimed at arranging or influencing the outcome of matches during the 2013 and 2014 K-League seasons.

“Such indirect involvement was found to be in contravention of Article 11.8 of the Entry Manual for the AFC Club Competitions 2017-2020. As such, Jeonbuk Hyundai Motors (KOR) were deemed not to have met the sporting criteria to participate in the AFC Champions League 2017.

“The body subsequently ordered that Jeju United FC (KOR) shall be the third seed and Ulsan Hyundai (KOR) the fourth seed representing the Korea Football Association in the AFC Champions League 2017.”