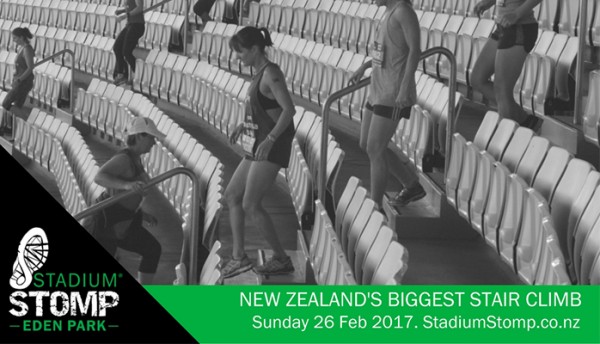 New Zealand’s biggest stair climb, Stadium Stomp takes stair climbing and endurance events presents a course covering over 5,000 stairs within Eden Park’s grandstands, with participants sent up, down and around the bays of the famous venue.

Stadium Stomp is not a competition or a race, but a test of stamina and personal achievement. It’s for anyone who wants to challenge themselves, get fit and have fun.

“We are delighted that Stadium Stomp Eden Park will support St John again in 2017."

Eden Parks is encouraging ‘stompers’ to make every step count and fundraise for event charity partner St John or nominate a cause close to their heart.

The event is open to people of all fitness levels aged 12 years and over.

The first wave of stompers set off at 9am with wave times taking off every 15 minutes until 12pm.

For more information go to www.stadiumstomp.co.nz