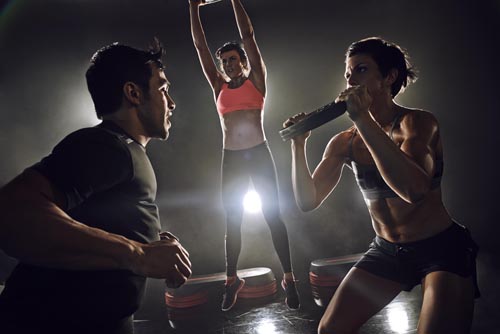 Reebok and Les Mills have revealed The Project: IMMERSIVE FITNESS™, a new workout concept that aims to revolutionise the Studio Fitness industry.

The Project: IMMERSIVE FITNESS™ draws inspiration from live music performance technology and 360° cinema to take the studio workouts to showcase fitness in the digital age.

“Participants taking part in a cycle class may find themselves riding up an impossibly steep glacier or sprinting their way around a digital velodrome. In a dance class you might be immersed in a tent at a music festival, where everybody‟s dancing together.”

Both Reebok and Les Mills understand the importance of a varied routine to ensure that consumers are constantly engaged and challenged by their workout. The Project: IMMERSIVE FITNESS™ enables and encourages people to embrace the physical, social and mental side of fitness.

“At Les Mills, we have been creating group workout environments that lead people to the zone for 30 years; through music, choreography and rock star instructors.

“The Project really takes the zone to the next level and we, along with our collaborator Reebok, are so thrilled to share this brand new fitness experience with the world.”

Reebok Brand President Matt O’Toole adds “at Reebok, we are committed to driving the next great evolution in the fitness industry.

“We’re not content to just accept things the way they are. We want to do it better, and The Project is really just the beginning. Along with our partner Les Mills, we are redefining what is possible and taking the in-gym fitness experience far beyond what has existed for the past few decades.”

Some of the world’s favourite Les Mills workouts have been adapted specifically for consumers to trial during an international European tour over the coming months.

Following its debut in London, The Project: IMMERSIVE FITNESS™ will make a promotional tour of major European cities including Stockholm, Berlin, Amsterdam, Paris and Milan, giving fitness enthusiasts the opportunity to experience the new program free of charge, with workouts including The Trip’ (cycle class), BODYCOMBAT™/LES MILLS GRIT™ Immersive, and BODYJAM™/ BODYBALANCE™ Immersive.

A wider consumer launch in Europe and the United States is planned for 2015.

Reebok and Les Mills have applied their expertise to create a collection of co-branded apparel and footwear specifically designed to be worn during these types of studio fitness workouts. The Reebok/Les Mills collection is available to buy worldwide and will be worn by Les Mills instructors around the globe.