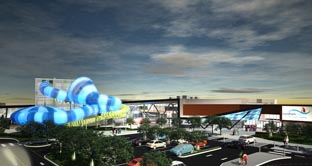 Parts of Wyndham City Council's Wyndham Leisure and Events Centre (WLEC) are now closed with the commencement of staged upgrades as part of an overall redevelopment plan.

The project will be limited to the redevelopment of the aquatic, recreation and sport facilty at the Belgravia Leisure managed WLEC, with the Council's ambitious plans for a $52 million facility incorporating a Community Learning Centre (library) having only been partially successful in securing funding.

Additional funds for the project have been sourced from land tax in the Wyndham area a major growth area in outer suburban Melbourne.

Victorian Planning Minister Matthew Guy said changes made by the Victorian Government last year enabled it to fast-track investment in much needed infrastructure projects such as the WLEC.

Minister Guy explained "this project will significantly enhance the local community and increase capacity to cater for existing and future growth area residents."

Minister Guy added that the upgrade of transport facilities and the WLEC will provide better public access as part of the major upgrade to the precinct, stating "investing in infrastructure is vital to the social fabric of outer suburban communities and investment will support the Wyndham growth area as it continues to develop."

The project currently underway will include an expanded aquatic and recreation facility with the construction of a new 50 metre pool with disabled access meeting Building Council Australia codes; a new fitness suite; a redeveloped events centre to broaden the use of the existing facility; construction of a forecourt and piazza space; and reconfigured car parking with additional car parking spaces.

While early works on the project are underway, major works will begin in early 2013 with completion scheduled for October 2014.

Meanwhile, the full $52 million facility will remain on the site masterplan with the Council to review its development at a later date.

One of the major growth areas in Melbourne, Wyndham City Council has been widely criticised for its facility provision which is seen to lag behind that of other Victorian municipalities.

Project updates can be seen at www.wyndham.vic.gov.au/residents/community/80derrimutroad