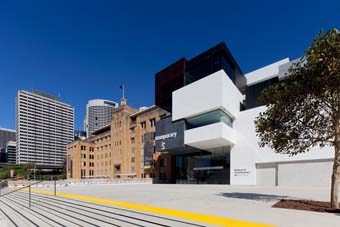 A bold, new and significantly expanded Museum of Contemporary Art (MCA) Australia has reopened in Sydney.

Following a $53 million redevelopment, the Museum has been transformed into a major cultural centre for contemporary art and creative learning.

The widely anticipated reopening of the MCA was officiated yesterday by NSW Premier Barry O'Farrell and Federal Minister for the Arts Simon Crean - the NSW and Federal Governments having provided equal contributions of $13 million to the project which increases gallery space by 50% and provides room for the creation of a new National Centre for Creative Learning (NCCL).

The new MCA has reopened with Marking Time, an international exhibition featuring major works by eleven Australian and international artists. The concept and representation of time - past, present and future - is reinterpreted and revealed across diverse media including drawing, watercolour, sculpture, installation, sound and light.

The MCA has also secured the Southern Hemisphere premiere of Christian Marclay's groundbreaking 24-hour video work, The Clock, which was shown in its entirety on the today (29th March 2012) and will be played continuously during regular museum opening hours. Every subsequent Thursday there will be another special 24-hour presentation of this work.

For the first time, an entire floor is dedicated permanently to presenting work from the MCA Collection. Work by more than 170 Australian artists in Volume One: MCA Collection, reflects the breadth of Australian contemporary art over the past 20 years.

Local Positioning Systems, curated by Performance Space, brings performance and live art to the MCA under different guises and in several locations. The program comprises performances from six Australian artists and a UK collaborative.

A key feature of the new MCA's program is a series of site-specific commissions by Australian artists in a variety of media including wall painting, sculpture and video.

Another addition to the Museum are the new rooftop venues. Created to take advantage of their location,the venues offer spectacular views across Sydney Harbour from the Opera House to the Harbour Bridge.

Education is a key element of the redevelopment with the NCCL facilitating the Museum's commitment to innovation and consolidate its role as a leader in contemporary art education.

The MCA redevelopment responds to the growing audience for contemporary art in Australia.

In addition to the NSW and Federal Government funding other donors to the redevelopment were the Mordant family - $15 million; the City of Sydney - $1 million; other private donors - $9 million; and the MCA - $2 million.

Speaking at the opening, Minister Crean stated that "investing in the arts generates a double dividend for the nation - an economic dividend in terms of attendance, jobs and attracting tourism, and a social dividend as the arts empower individuals and underpin important values of expression, tolerance and inclusion.

"On the eve of the release of Australia's first national cultural policy in almost 20 years, the redeveloped MCA will ensure creative excellence drives our economy and inspires future generations."

For more information go to www.mca.com.au/