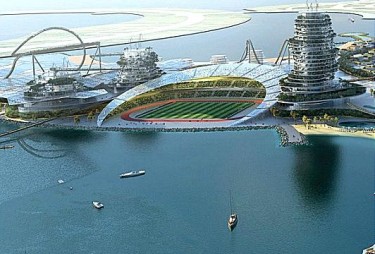 Due to open in January 2015, Real Madrid Resort Island will be supported by the Government of the Emirate of Ras al-Khaimah. To be built on the artificial island of Al Marjan, the resort will feature an amuesement park, marina, luxury hotels, villas, a club museum, sports facilities and a futuristic 10,000-seat stadium with one side open to the sea.

Introducing the development Real Madrid President Florentino Pï¿½rez stated "it is a decisive and strategic step that will strengthen our institution in the Middle East and Asia.

"Real Madrid Resort Island will be a major tourist and sporting centre of great dimensions and the highest level. This extraordinary complex will attract millions of people looking for quality leisure services."

The 430,000 metre2 facility is expected to attract around one million visitors in 2015.

The Club said the resort's location put it equidistant between Europe and the East Asia, adding that more than half their estimated 300 million followers were based in Asia.