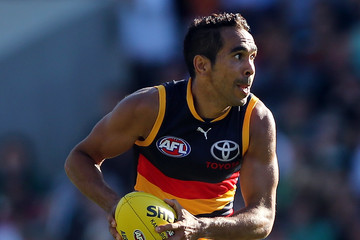 After being subjected to more racial abuse from fans during the Crows game with Port Adelaide at the Adelaide Oval last weekend, Betts's told Adelaide radio station 5AA “stuff like this wrecks it.

"We want to make footy an enjoyable place and support your team, win or lose.

"There is racial abuse … it's not kid-friendly. It's just not a great place to be."

A woman has been charged by South Australian Police after she labelled Betts an "ape" on social media after the Crows beat the Power in ‘Showdown 42’ last Saturday.

Another Power fan had his club membership rescinded for making a racial taunt during the game, while an Adelaide fan racially abused Port ruckman Paddy Ryder during the match.

"It's racism and we want to stomp it out of the game. It affects me but it affects people around me more.

"Anna, my wife, was very upset with it this week, just the hatred of it. She was teary.

"Our kids are Indigenous and they will have to grow up with this stuff as well."

Last August, a Port supporter threw a banana at Betts during a game and had her membership cancelled.

Betts said the latest furore had been tough to handle but he was grateful for widespread support.

AFL Chief Executive Gillon McLachlan pledged to do more to combat racism while the Adelaide and Port Adelaide clubs issued a joint message in a bid to end racial vilification.

The AFL Players Association and various AFL identities also spoke out in support of Betts and Ryder.

Betts added “the support that has been shown to me and my family by both footy clubs, the players association, has been fantastic.

"And the AFL, with Gillon McLachlan calling me three days ago before his press conference.

"I thank everyone for their support."

Video of fighting between at least a dozen football fans at last Saturday’s  game has gone viral on social media, attracting more than 350,000 views and sparking widespread condemnation.

South Australian Police are reportedly investigating the incident while the clubs and the AFL are awaiting a report on the fan violence from the Adelaide Oval Stadium Management Authority (AOSMA).

AOSMA has not issued any comment on the incidents.