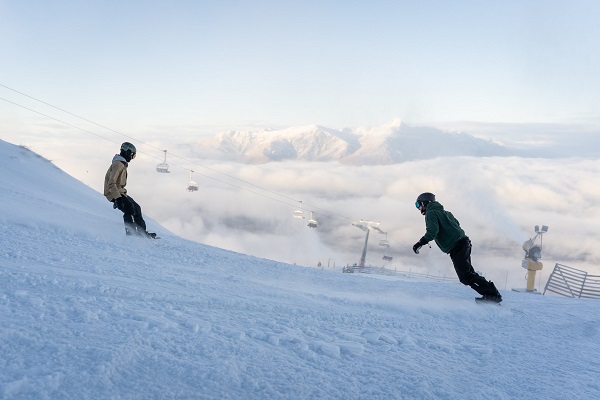 Queenstown ski fields Coronet Peak and The Remarkables are ready to welcome the annual influx of winter school holiday visitors thanks to advanced snowmaking technology.

Despite the weather conditions preventing much natural snowfall over the past couple of weeks, temperatures have been cold enough to produce a solid snow base with state-of-the-art snow guns.

The Remarkables had a 7cm natural snowfall on Thursday and, accompanied by its fleet of 97 snow guns, boasts a snow base of 80cm over 60% of the mountain.

“The crisp, clear temperatures make for a great day up the slopes and our guests are commenting on how great the snow conditions are.”

Coronet Peak has 218 snow guns which have been working round the clock to produce a base of 40cm (on average) over 80% of the mountain.

Coronet Peak ski area manager Nigel Kerr advised "our snow-making system is arguably the best in the southern hemisphere and we are able to produce extensive snow coverage from the top to the bottom of the mountain.

“One night of snowmaking can transform Coronet Peak completely. We pump out 18 tonnes of dry winter snow a minute and it’s looking brilliant up here.”

“School holidays is always a great time for families to hit the slopes together and we’re looking forward to welcoming guests from around New Zealand, Australia and beyond - and of course Queenstown locals - at both Coronet Peak and The Remarkables.”

Night skiing at Coronet Peak continues to be a huge drawcard for locals and visitors – and is expected to be popular with all ages over the school holidays. Corona Friday Night Skis are a great way to finish the working week, hit the slopes and enjoy a few beers at the base building. Sony Playstation Saturday Night Skis are all about family fun with the ‘hunt for the missing symbol’ taking place on snow – and a PS4 console and games to be won every Saturday night. New this season is the Ultimate Ears Wednesday Night Ski where guests can win one of five Ultimate Ears Megaboom 3s every Wednesday night.