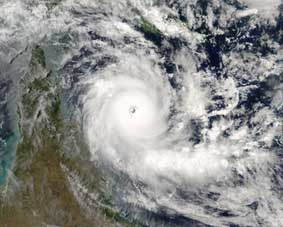 Thousands of tourism jobs on the cyclone-hit Capricornia Coast could be lost if the region's attractions, including its national parks, are not quickly repaired.

In the Capricornia Region, tourist accommodation is damaged, power will not be back until Tuesday next week, roads are still blocked and damaged, and communications are still badly impacted.

The concerns for tourism jobs were raised at a Cyclone Marcia Economic Recovery meeting in Brisbane on Wednesday (25th February).

Gschwind told Fairfax Media "in that region - the Rockhampton, Yeppoon, Fraser Coast, down to the North Burnett region - there are thousands of tourism jobs.

"The loss of wages, it could have a real multiplier effect."

Dr Milles stated "Capricorn area parks were hardest hit with Byfield National Park being directly in the path of Marcia as the cyclone made landfall.”

Byfield National Park, just north of Yeppoon, is an internationally-recognised drawcard for tourists.

Dr Miles added “we know our parks and forests are important to tourism and people's livelihood.

"It's a priority to get them reopened and Queensland's Parks and Wildlife Services will be making every effort.

"The focus will be on popular sites, even if we can just open a park's day-use area."

Great Keppel Island is struggling with erosion to its beaches and the collapse of several holiday units.

Dr Miles said other national parks and state forests were also badly impacted, concluding “many are still inaccessible and early reports indicate that parks and forests in Marcia's path have sustained a huge number of tree-falls, flooding, erosion, track and road washouts and landslides.

"Coastlines and islands will be affected by debris and we'll work with the Great Barrier Reef Marine Park Authority and other partners in the reef locations."

QPWS Recovery Unit Executive Director Clive Cook stated “the damage is pretty significant up there around Byfield National Park, because that is where the eye of the cyclone passed over.

"It stripped all the vegetation and blocked roads and tracks, created a fair bit of erosion to the beaches and put holes in access roads.

"Staff are beavering away cutting their way back into Byfield National Park, as we speak."