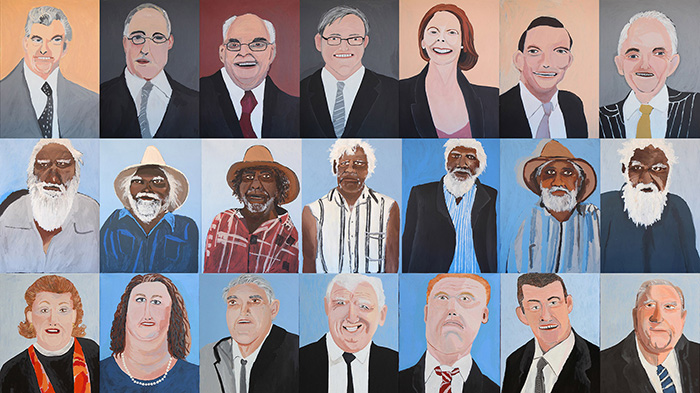 Premier Annastacia Palaszczuk launched the ninth Asia Pacific Triennial of Contemporary Art (APT) series, APT9, which is the first and only recurring exhibition to focus exclusively on artists from Australia, Asia and the Pacific.

“This flagship exhibition will take people on a journey through stories and experiences from across our expansive region and is a great reminder of the common ground we share and the diversity that enriches us,” the Premier said.

“The series has introduced us to new and significant artistic talent and has deeply enriched our understanding of the social and cultural fabric of the Asia Pacific.

“It has also helped the Queensland Art Gallery and Gallery of Modern Art build a truly outstanding international event.

“The Queensland Government has been a proud supporter of APT since its inception in 1993 with the exhibition attracting more than 3 million visitors over its 25-year history.”

“Each APT engages us with the ideas and experiences of life in Asia, the Pacific and Australia as expressed by contemporary artists,” she said.

“APT has been instrumental for QAGOMA in building strong relationships throughout the region and developing an unrivalled collection of contemporary art from Australia and the Asia Pacific.

“This is a wonderful exhibition and I encourage everyone to come and see it.

“I am so proud of our vibrant arts sector, which continues to put Queensland centre stage as a leading cultural tourism destination.

That’s why the Queensland Government committed $180 million in this year’s State Budget for new funding to the arts.”

QAGOMA Director Chris Saines said APT9 was an expansive free exhibition that captured the energy of new art being created in Asia, the Pacific and Australia.

“Developed by our specialist team of QAGOMA curators, APT9 presents some of the most exciting and important contemporary art being created in the region, including major new commissions designed for the Gallery’s signature spaces,” Saines said.

"Following three years of curatorial travel and extensive research, the ninth edition of our flagship exhibition series offers an accessible contemporary art experience across the entire Gallery of Modern Art including the Children’s Art Centre and the Australian Cinémathèque and key spaces at the Queensland Art Gallery until 28th April 2019.”

APT9 Kids
Integral to the Triennial exhibition, is APT9 Kids, eight interactive hands-on and multimedia activities developed by artists especially for children and families. The APT9 Kids on Tour program will be presented across more than 100 regional and remote venues throughout the state from January through to April 2019 and an all-ages APT9 Summer Festival will be staged at QAGOMA from 18th - 20th January 2019. 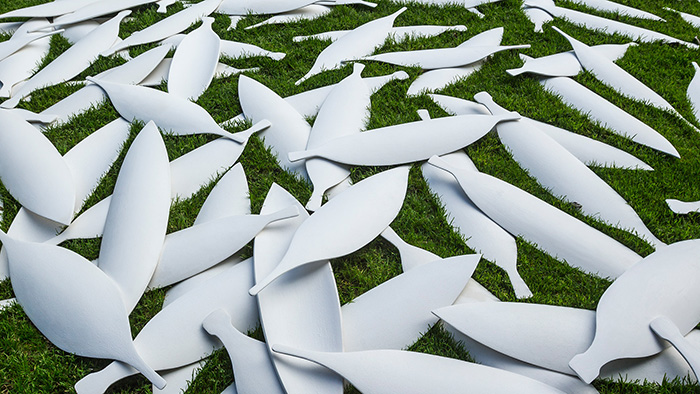 Jonathan Jones works across a range of media to create installations, interventions and public artworks exploring Aboriginal practices, relationships and ideas. (Pictured top). These projects are grounded in research and collaboration with local communities and are often site-specific, representing, embodying or engaging with a site. Jones is from the Kamilaroi/Wiradjuri people in New South Wales and researches his culture through early writings and museum collections. He is well known for his woven net light installations, which draw on the visual and spatial configurations of minimalist sculpture, combined with references to ceremonial pattern-making and complex cultural allusions. Recent works have involved collaboration with Wiradjuri Elder and language expert Dr Uncle Stan Grant Snr AM and a group of well-known weavers and carvers. 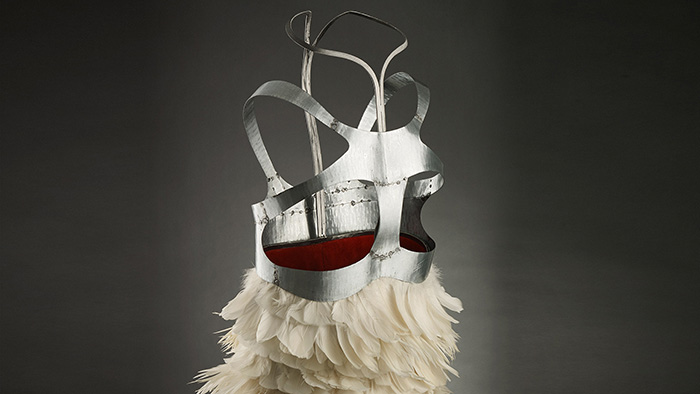 In a practice spanning more than 25 years, Naiza Khan has created a compelling collection of works concerned with the female body, as well as exploring broader themes of place and identity. Khan trained as a painter and printmaker and is also known for her painting, sculpture and installations. These have included Henna Hands (1997-2002), in which she stencilled henna-paste silhouettes of female bodies on the walls of a Karachi neighbourhood, and an ongoing series of sculptural works using galvanised steel, latex, leather, feathers and organza. These sculptures resemble armour but take their form from lingerie, chastity belts, corsets and other items of clothing. Khan initially created the works in response to a defining socio-religious Urdu text that prescribed ‘appropriate’ morals and behaviour for young Muslim women. With their fragmented, incomplete forms they also resemble wounded bodies, reflecting on the presence of militarism and violence throughout the world. 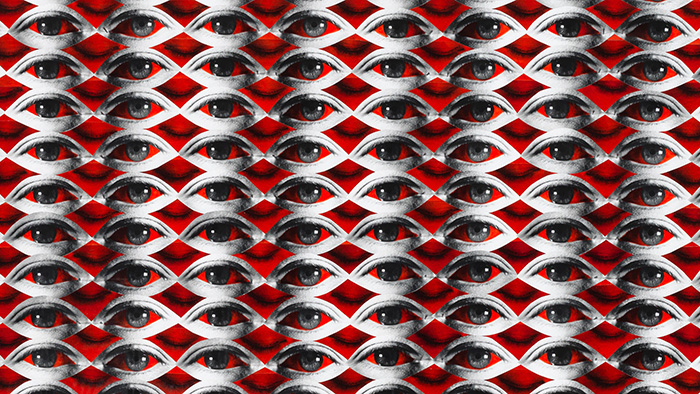 Kapulani Landgraf’s practice captures a contemporary indigenous view of sacred places and land issues in Hawai‘i. Passionately concerned with heritage and cultural issues, she draws on the Hawaiian language, as well as cultural traditions, storytelling and legends in her practice. Known for her stunning books of photographs documenting remote sacred sites, she also creates photo collages juxtaposing historical and original photographs with images associated with personal and traditional symbolism. These works honour ancestral connections to ancient landscapes, and expose the legacies of colonisation and modern development that have threatened and destroyed places that are significant parts of Hawaiians' identity as na poe 'aina, the first people of the land. While she has a distinct political message and describes her camera as a ‘weapon’ of defence, her works are not authoritarian or heavy handed, instead aiming to educate, challenge and provoke thought. 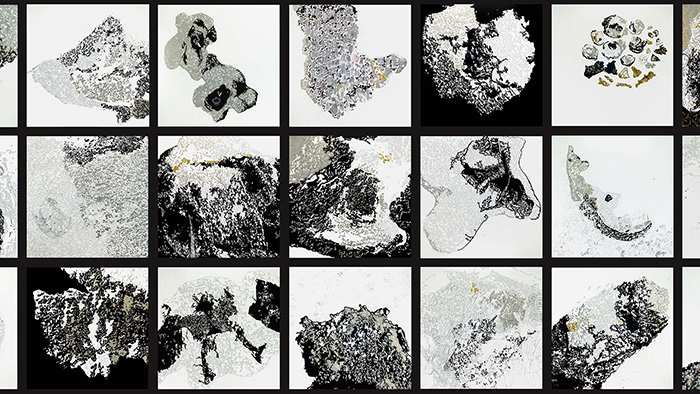 Ly Hoàng Ly is a multi-disciplinary artist working across poetry, painting, video, performance and installation. She studied painting in Vietnam, later earning an MFA in sculpture through the Arts Institute of Chicago. She also works as an editor of a youth magazine. Ly’s installations often incorporate a level of performance or activation, and her work makes bodily references to women’s experiences of maternity and menstruation, as well as highlighting human emotions and our relationship to place and nature. An ongoing project since 2011 addresses the subject of immigration, drawing on her own experience as a young mother when she lived in Chicago and on Vietnam’s history of passage and dislocation. Recurring motifs of boats, houses and water allow her to express these ideas around home and movement, the fragility of memory, and the importance of community and human connection

VINCENT NAMATJIRA
Born 1983 Alice Springs
Lives and works in Indulkana, Anangu Pitjantjatjara Yankunytjatjara (APY) Lands, South Australia, (work pictured top).
A painter from Indulkana in in South Australia, Vincent Namatjira has established himself as a subversive and witty portraitist. Vincent is the great-grandson of the renowned Arrernte watercolour artist Albert Namatjira. Vincent was born in Alice Springs and spent his early childhood at Hermannsburg. When his mother passed away unexpectedly, Vincent was removed from his family and raised in foster homes. Intensely aware of his family’s history, he yearned to return to the central desert. He moved back to Hermannsburg as a young adult and then settled with his wife’s family at Kanpi, on the APY Lands, where he learnt to paint in a customary dot painting style. Since 2013, Vincent has been painting portraits of important figures, both personally familiar and famously political. He is an acute observer of national and international politics and the connections between leadership, wealth, power and influence.