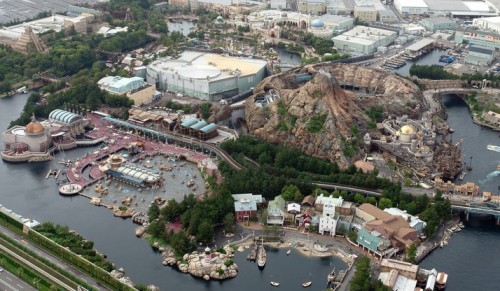 Tokyo's Disneyland and the DisneySea theme parks returned to full operations yesterday (Thursday) for the first time since a devastating earthquake and tsunami struck Japan on 11th March.

Two new attractions made their debut at Tokyo DisneySea's reopening - the 'Fantasmic' nighttime spectacular and the Mickey and Friends' Greeting Trails character meet-and-greet area. However, the park has postponed plans to celebrate its 10th anniversary in September, out of consideration for victims of the disaster.

• The new 'Easter Wonderland' parade made its debut when the park reopened. It featured floats themed to American and European customs, such as egg decorating, egg hunts and flower bonnets;
• On 9th May the new 'Nightfall Glow' nighttime parade will temporarily replace the venerable 'Electrical Parade: DreamLights', which will close for a two-month update;
• Big Thunder Mountain Railroad remains closed to repair quake damage to the rock surfaces surrounding the roller coaster and, for the time being, the park has reduced the monorail operating schedule and canceled the nightly fireworks show.