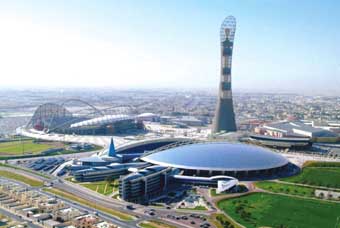 The Qatar Olympic Committee (QOC) has published a comprehensive lineup of 89 premier sporting events that will be hosted in Qatar over the coming year.

A total of 55 of these fixtures will be international events, rising from the 43 that were hosted in the 2014/2015 calendar year. Highlights include the IPC Athletics World Championships, AIBA World Boxing Championships and the first-ever Asian Youth Athletics Championships. In addition, Qatar will continue to host world-class annual fixtures, including the IAAF Diamond League, ATP and WTA tour events, FINA Swimming World Cup, FIBA 3x3 All Stars and Modern Pentathlon Champion of Champions.

Commenting on the remarkable line up of events to be hosted by the emerging sporting nation Qatar Olympic Committee QOC), Director of Sport Affairs, Khaleel Al Jabir stated “the rise in international sporting events hosted in Qatar shows how we continue to be committed to using our experience of hosting world-class events and our state-of-the-art facilities to organise events that will have an impact on the development of sport in our nation, our region and globally.

“It is our ambition to use these events to inspire a new generation of young people through sport and to promote an active and healthy lifestyle amongst our people.

“We look forward to welcoming people from around the world to Qatar to share our passion for sport, our warm hospitality and our love for life.”

Like many of the previous major sports events that have been hosted in Qatar, both the AIBA World Boxing Championships and IPC Athletics World Championships will be hosted in Middle East for the first time in history.

The inaugural Asian Youth Athletics Championships is open to athletes aged 17 and under and aims to boost athletics in the continent and encourage youth participation. It is the vision of Dahlan Al Hamad, President of the Qatar Athletics Federation, who recently retained his position as President of the Asian Athletics Association. The Championships will be held from 8th-11th May 2015, directly before Doha opens the IAAF Diamond League season on 15th May. Both events will be the first major athletics events hosted in Doha since it won the rights to host the 2019 IAAF World Championships last November.

Further notable international events on the 2015/2016 calendar include the FIVB Beach Volleyball World Tour in November 2015, the AFC U22 Championships and 19th Golf Masters in January 2016 and 7th Asian Indoor Athletics Championships in February 2016.