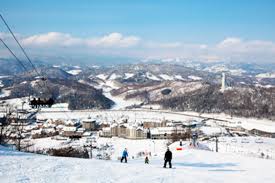 More than 25,000 visitors to PyeongChang's Alpensia Resort have ranked it as one of the South Korea's top destinations.

Bang-rae Jo, Chief Executive of the Alpensia Resort, revealed the results of a survey confirming that more than 25,000 people visited the resort's ski tower during the peak summer season from 17th July to 17th August 2010.

Part of a survey conducted by the Gangwondo Development Corporation, the results highlight the Alpensia Resort's appeal as a year-round destination. Visitors of the resort's well-known ski tower have an opportunity to enjoy a unique view of the Daegwallyeong Mountains and a spectacular panoramic perspective of PyeongChang 2018's proposed Alpensia Cluster at the heart of the cityâs bid for the 2018 Winter Olympic Games.

PyeongChang 2018 Chairman and Chief Executive Yang Ho Cho explained that âwe are delighted with the level of interest shown for the Alpensia Resort and its venues among tourists in the region this year. While PyeongChang is bidding for the XXIII Olympic Winter Games, we believe that its use as a year-round resort is an important part of our story to the Olympic Family and will no doubt contribute to a meaningful legacy after the Games.

"The Alpensia Resort is at the heart of our proposal and in addition to the ski tower, features state-of-the-art sporting and accommodation facilities. Last year the resort successfully hosted the FIS Sky Jumping Continental Cup and is due to host another one in January 2011, showcasing our capability to host professional international winter sporting events."

Alpensia's hotels and condominiums were also booked to capacity until mid-August due to the Great Mountains International Music Festival which drew over 5,000 visitors while many also came to the area to enjoy Ocean 700, Korea's largest indoor water park as well as the golf course within the Alpensia Resort.

PyeongChang's Alpensia Resort is one of the principal Olympic clusters in the bid's Games Plan and would be the location of the main Olympic Village, the Opening and Closing Ceremonies and several competition venues such as Cross Country and Biathlon.

The bid's Chairman and Chief Executive is Yang Ho Cho, who is also Chairman of Korean Air. Additional members of the PyeongChang 2018 Bid Committee include representatives from all levels of national and local government, the Korean Olympic Committee (KOC), the Korean Paralympic Committee (KPC), winter sports athletes and para-athletes, and private businesses.

The election of the Host City of the XXIII Olympic Winter Games will take place during the 123rd International Olympic Committee (IOC) Session in Durban, South Africa on 6th July 2011.

For further information about PyeongChang's bid to host the 2018 Olympic and Paralympic Winter Games, go to www.pyeongchang2018.org