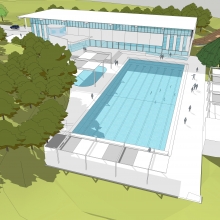 The proposed facility, planned and designed by TompkinsMDA Architects, has been driven by local campaigning.

The proposal for the facility features:

Bexley Pool Reference Group (BPRG) community representative Mark Hanna explains "should this upgrade become a reality, it will provide state of the art facilities for a broad cross section of the community."

In respect of the public feedback, Hanna adds "public support for the new facility was record shattering.

"Never before has RCC seen such overwhelming support for a proposal. A total of 1,651 submissions were received, of which 96% supported the proposal.

"92% supported it without reservation and only 2% opposed the proposal. Importantly, a number of Key Peak Bodies sent letters of support."

In addition to the strong community support, there is also strong support from bodies responsible for swimming safety, education and competitive swimming.

The public exhibition and engagement for the Proposal was undertaken in accordance with the Council's engagement strategy, which ensured that the community was well informed, had the opportunity to make submissions, and had options to attend sessions to clarify and discuss the concept design with Council officers.

Promotional strategies with a wide range of campaigns were implemented during the engagement period to inform the community about the Proposal.

• A Fact Sheet and Feedback Form
• Article in Rockdale Review;
• Posters in local libraries, Customer Service Centre and Bexley Swimming Centre;
• Brochures for general distribution;
• Council website - a dedicated section on the home page and a link to Have Your Say/Public Exhibition;
• Letters to all residents immediately adjoining the perimeter of the Site inviting them to attend consultation meetings;
• Letters/email to the Reference Group and interested community members who have provided their contact details to Council;
• Advertisements in the local newspaper - thee times during the engagement period;
• Media Briefing with local and ethnic media; and
• Media Releases to local and ethnic newspapers.

RCC will now undertake a Capital Expenditure Review for the facility which is expected to cost in excess of $10 million.

The completed Review will then be formally reported to the 20th June 2012 Council Meeting.

Mark Hanna is hopeful that the development will proceed, concluding "it is hoped that with this level of community support, the long overdue upgrade will proceed without undue delay or political interference."

For more information go to www.rockdale.nsw.gov.au/Council_Projects/Pages/Projects_BexleySwimming.aspx