The Tourism & Transport Forum Australia (TTF) Australia has expressed its disappointment with the Productivity Commission’s report into the Barriers to Growth in Service Exports which failed to recognise the value of destination marketing or make any recommendations on visa reform.

“Marketing 101 says international visitors won’t come to your country if they don’t know what visitor experiences you have to offer.

“We need the co-ordinated approach and funding from government for the good work that Tourism Australia and its state and territory cousins do in promoting Australia overseas.

“Destination marketing is good value for public investment with an analysis that has already been undertaken showing that the return on investment is about 15:1 – an absolute bargain.

“Federal, state and territory governments base their investments in major marketing programs and major events on extensive cost/benefit research.

Osmond said that TTF was also disappointed that the Productivity Commission did not use this report to make recommendations to reform Australia’s visa system and reduce the cost of the Passenger Movement Charge (PMC). 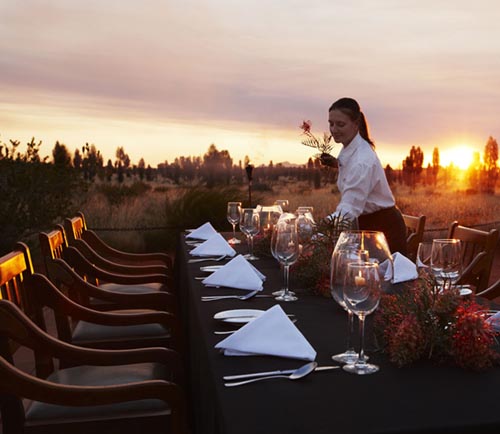 She added “the Productivity Commission recognised the industry’s concerns around the high costs of visas and the PMC but despite this they failed to make any recommendations for policy reform.

“The cost of visas and the PMC remain a heavy burden carried by the tourism industry at a time when other international jurisdictions are making concerted efforts to cut the cost of entry to their countries. The Productivity Commission should have been leading the charge on reducing these uncompetitive fees.”

Osmond said the focus on having immigration integrity as the sole policy objective of the international student visa program is the wrong mindset.

Images: The Victorian Coast (top) and hospitality at Ayers Rock (below).