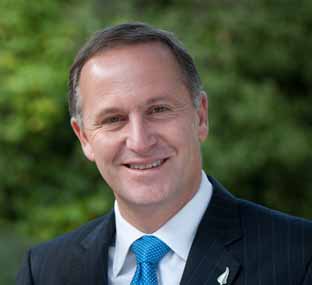 New Zealand Prime Minister John Key has announced that he will retain the tourism portfolio he has held for the past six years as his Government prepares to begin its third term in office.

Prime Minister Key's role as Minister for Tourism, which he is taking on for a third consecutive term, will be aided by Paula Bennett as the new Associate Minister of Tourism.

It is a move likely to welcomed by tourist industry leaders and fulfil a National party election committment for Key to retain the portfolio and to "keeping tourism at the heart of Government".

Speaking prior to the announcement of the Ministry, Tourism Industry Association New Zealand (TIANZ) Chief Executive Chris Roberts told the New Zealand Herald that was looking forward to the Prime Minister remaining as Minister for Tourism.

Roberts stated "it can't really be underestimated how important a signal that has sent over the last six years.

"It's worked well with the Prime Minister being across all the tourism issues but so has his office and there's a level of understanding ... of tourism issues that wouldn't normally be there."

Among the National's election promises were a focus on high value and special interest visitors, providing support to attract conventions, work to further streamline processing to attract more high value Chinese, and support for Maori tourism.

Sullivan stated "there is still a lot of work to do as New Zealand gears up for a huge business events infrastructure boost.

“With new Convention Centres in Auckland and Christchurch set for opening by 2018, and Wellington and Queenstown also on the cards we can confidently get out and sell our country to the world as a great place to meet, learn and do business,” New Zealand’s business tourism industry leader says.

“Mr Key gets our industry. He and his team understand business events and business tourism and the value of putting them at the top of the government’s growth agenda,” she says.

“We are delighted to know there will be a continued focus on high value and special interest visitors, and ongoing support to attract conventions through Tourism New Zealand’s Business Events funding.”

The new Ministry will be sworn in at Government House in Wellington at 11am on Wednesday morning (8th October).