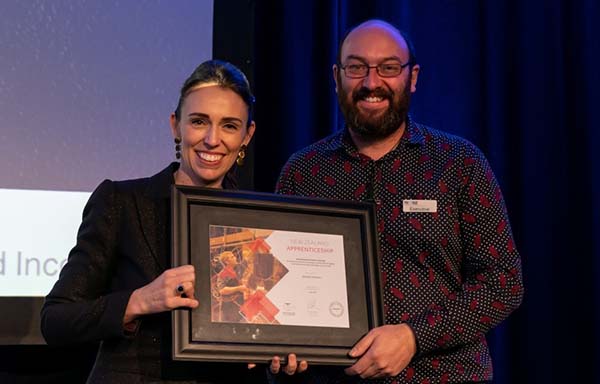 Prime Minister Ardern acknowledged the work that went into developing the qualification, describing it as “no mean feat to be able to have pulled that together”, and adding “I congratulate ETNZ, and obviously your ITO who’s been involved as well, on the commitment to putting in place the structures for formal recognition of the important skills in your industry".

Skills Active Chief Executive Dr Grant Davidson says it was a big surprise and very special to have the graduates receive their certificates from the Prime Minister, who is also Minister for Arts, Culture and Heritage.

The graduation was part of a wider session in which ETNZ and the Prime Minister celebrated the industry as a whole. The Skills Active trainees have completed the New Zealand Certificate in Entertainment and Event Technology (Level 4) – a new on-job apprenticeship programme.

They are all highly-skilled technical specialists of long standing. As well as completing the programme, they have become registered Skills Active assessors, and will be assessing other on-job trainees in the entertainment and events industry.

Dr Davidson notes that ETNZ did not have access to on-job qualifications for its members until Skills Active became the ITO for performing arts in 2017. Skills Active, ETNZ and other key partners worked closely over several years to develop the new qualifications, which are now being rolled out.

He advised “having a dedicated ITO means the industry has direct input into its qualifications – they are for the industry, by the industry and about the industry. And they are designed to evolve and adapt to respond to industry needs, and keep pace with changes in practice.

“It was gratifying to have the Prime Minister take part in this graduation ceremony. I know that ETNZ, and certainly Skills Active Aotearoa too, were thrilled and very grateful that she was able to make time in her busy schedule to be there.

“We hope she came away with a sense of the huge value of these programmes for people working in performing arts, and the pride that these trainees have in being among the first in their industry to complete performing arts apprenticeships. Now they will be passing on the torch to even more trainees around the country through their work as assessors.”

Dr Davidson concluded that the ETNZ graduation was “a fitting way to celebrate and emphasise the close and productive relationship between Skills Active and one of its industry partners”.