Porirua Skate Park has had an award-winning makeover, with its new 3D mural winning first place for Best Professional Mural in the 2016 Resene Mural Masterpieces Awards.

The design brief and artistic management of the skate park was undertaken by the Porirua Community Arts Council, with the park preparation and project support by Porirua City Council, and input from Ngati Toa and members of the local skate community.

The skate park’s design brings to life the local Ngati Toa story of Awarua the Porirua Harbour Taniwha who wanted to fly. Awarua’s friend Rereroa the albatross inspired him and encouraged him with flying lessons, and it is these two characters which feature on the main part of the park, which actually sits on what used to be the edge of Porirua Harbour.

The Awarua concept was designed by Porirua Community Arts Council member, Moses Viliamu. This was then interpreted and painted in 3D by Marc Spijkerbosch, an internationally regarded artist who has worked with artists in Porirua on a number of city projects. A team of local artists worked alongside Marc and Moses on the mural, completing the work in December 2016.

On behalf of the Arts Council, Chair Judy McKoy says it’s great that the hard work by the artists has been recognised.

McKoy stated "this project has been a triumph of and by the community, and seeing a tired and worn skate park emerge with a new and relevant design - which also happened to win a major award - really puts Porirua on the map." 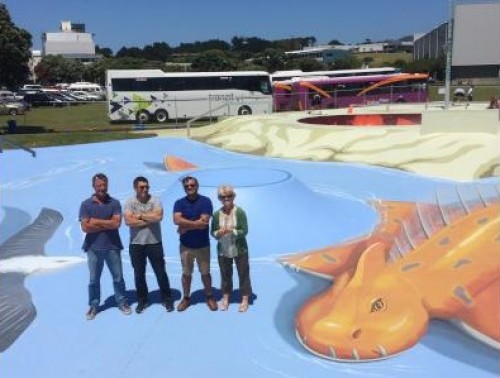 Porirua Mayor Mike Tana is looking forward to seeing the skate park in action at the national day-long skate championship event, which is running as part of the Waitangi Day Festival of the Elements on 6th February.

Mayor Mike Tana added “the skate park is looking awesome and the award-winning design is the result of a great partnership by the Arts Council, Ngati Toa, the community and Porirua City Council. The Arts Council and artists have put in some long hours to refresh the design on the skate park.

"It’s fitting that some of the country’s top skaters will get to test out the new design, which is a work of artistic magic. This year’s Festival element is air, which ties in with both the Ngati Toa legend of Awarua learning to fly and the skaters, who’ll be getting air on their skateboards."

For more information about the Resene award go to www.resene.co.nz/competition/murals/84-2016.htm

Images show the mural (top) and [from left] Marc Spijkerbosch, Mayor Mike Tana, Moses Viliamu and Judy McKoy at the Skate Park (below).