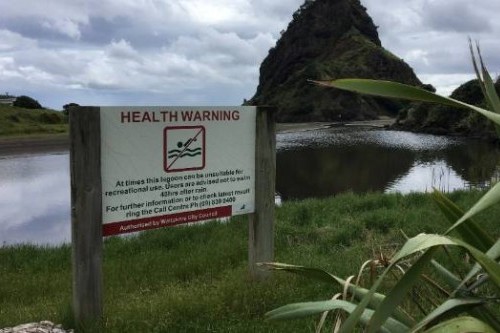 Of 206 New Zealand rivers, lakes, lagoons and estuaries tested regularly by councils during summer, only 57% were safe for swimming most of the time. The Ministry for the Environment report showed that one in nine freshwater swimming spots, including popular west coast lagoons, often had too much faecal matter in the water to be safe for bathing.

Auckland's Piha Lagoon, where young children often swim, was found to have high levels of E.coli, an indicator of faecal or human bacteria, in half of its tests over the 2009/10 summer period.

Bethells Lagoon was above the safe threshold for bacteria in a quarter of its tests. Lake Wainamu was safe for swimming every time it was tested and Karekare Lagoon was safe most of the time.

Northland region had the most spots, 10 out of 23, that were consistently too polluted to swim in. The intensification of farming in that area was believed to be responsible for its poor freshwater quality.

Green Party co-leader Dr Russel Norman said people would be surprised by how polluted their favourite swimming holes were, stating "these are the spots where New Zealand families have swum, fished and messed about in boats for generations. But these days, you run a pretty good chance of getting sick if you swim at many of our favourite spots."

Dr Norman said the tests only monitored E.coli levels, and once algal blooms and nitrogen pollution were taken into account, the results gave a bleak picture of the health of New Zealand's freshwater.

The report showed no improvement in national water quality over the past seven years.

Dr Norman called for urgent national direction on cleaning up rivers. A national inquiry on fresh water two years ago proposed sweeping changes to clean up rivers and streams. A spokesman for Environment Minister Dr Nick Smith said the minister was waiting on input from the Land and Water Forum on a draft policy statement. The forum combined environment, industry, tourism and recreation groups interested in freshwater management.

Dr Norman said a response from the forum was expected on Minister Smith's desk next month. If implemented, the national policy statement would give regional councils teeth in dealing with landowners and industry.

Any changes which could affect quality of water would require a specific resource consent. Regions would also be given strict timelines by which they would have to clean up their freshwater.

Recent testing on coastal beaches showed they were not as contaminated as freshwater swimming spots, because faecal matter was dispersed by the currents and large volumes of water at the coast. Last summer, 77% of popular beaches met health guidelines for swimming almost all of the time. The tests showed all Auckland and North Shore beaches were safe for swimming.