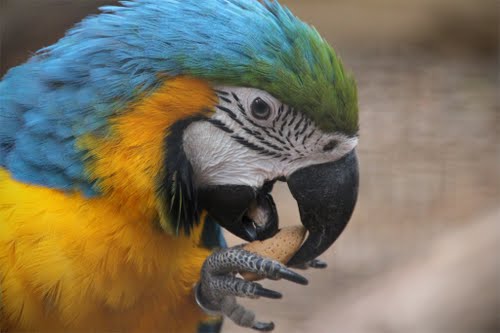 The two Macaws were among 10 birds stolen late on Christmas Eve from the Featherdale Wildlife Park at Doonside. Park keepers were concerned the rare South American parrots, which are worth about $6,000 each, would be neglected or separated.

But after a tip-off officers raided a home in western Sydney and found the Macaws in a backyard aviary.

The other eight stolen birds, including Red Tailed Black Cockatoos and White Breasted Ground Doves, have still not been found.

Featherdale Wildlife Park Administration Manager says the recovered birds are showing signs of stress but are otherwise well, stating "there's evidence that they've had a very traumatic couple of days, there's a few injuries and scratches and things but other than that they seem fairly healthy.

"We're fairly confident that once they're back in a familiar environment that they will make a full recovery."

The macaws have been returned to their aviary and Senior keepers are monitoring their recovery.

Senior Keeper Jake Webb added "we cannot express in words how grateful we are to the staff at Blacktown Police Station for their devotion to this case. Their hard work led to the quick recovery of our birds."

Police are continuing their investigation into the whereabouts of the other birds.