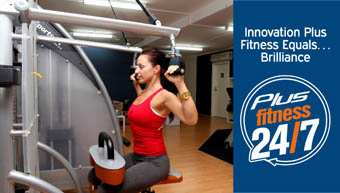 24/7 fitness franchise Plus Fitness is continuing its expansion with the recent openings of new clubs at Bondi Junction and East Gosford in NSW and Mount Lawley in Western Australia.

The chain will also be opening in Mona Vale, NSW on 25th September while following the opening of the East Gosford club, Plus Fitness' first on the NSW Central Coast, franchisees Avi and Nagita Sinha will be opening their second franchise at Ettalong Beach.

Reflecting on Plus Fitness' ongoing growth in just its fourth year of franchising and their recent acknowledgement in winning the 'SmartCompany Top Franchise Award for 2013', Plus Fitness Director/Franchisor John Fuller say much of the success comes from listening to consumers.

Having originally, along with co-Director Nigel Miller, planned to operate traditional 'big box' health clubs in Sydney, the pair started to recognise consumer demands were changing.

Fuller explains "we determined that the community was looking for more cost-effective solutions for their fitness solutions plus a higher level of flexibility with their memberships too.

"As a result we decided to change our model to 24-hour gyms (and) in doing so we reduced the footprint of our sites to allow for lower operating costs and in turn lower membership fees became achievable."

Plus Fitness also established a model which has no contract terms and today has 115 gyms while aiming for 150 by the middle of next year.

As well as receiving the 'SmartCompany Top Franchise Award for 2013', Plus Fitness were also ranked 8th in the Smart50 for 2013.

Commenting on this recognition, Fuller adds "we are honoured to have received this recognition which is a real testament to the passion of our Franchisees and the commitment and drive of our Head Office Team."

Fuller highlights "rapid growth" in 24/7 gyms, stating that "this growth has fuelled our determination (to be the best) and ensured that at no stage have we dropped the pace in our race to continue to establish many franchises, whilst maintaining sensible territory mapping, location and franchisee recruitment decisions all prior to our segment reaching market saturation,"

Looking forward, Fuller says Plus Fitness is going to continue its expansion across Australia with Victoria identified as a key target market. Beyond six gyms in the state and with three more scheduled to open, Fuller adds "we feel that the time is right to escalate our launch into Melbourne specifically.

"However, we have now formulated an exciting expansion strategy, which we are poised to launch in October this year.

"Our goal here is to sell a further 10 franchises in Melbourne metro by the end of 2013."

To find our more about Plus Fitness Franchising opportunities call 02 4648 2099.