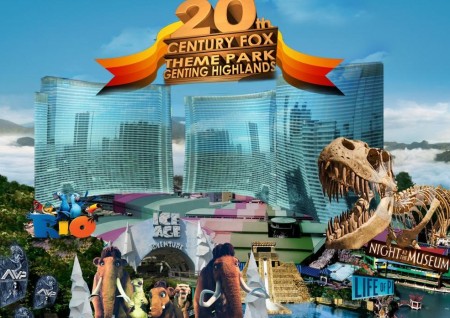 With work already underway on the site at Resorts World Genting in Malaysia's highlands details of the US$300 million attraction, to be known as Twentieth Century Fox World, have been released.

Set to open in 2016, the attraction will feature a fully immersive entertainment experience highlighting some of Fox's most recognised and powerful film brands.

Highlights of the theme park will include:

• More than 25 acres of land, featuring more than 25 rides and attractions from media based rides, thrill rides, dark rides, to children's rides and water rides;
• Rides and attractions based on Twentieth Century Fox blockbuster titles including 'Ice Age', 'Rio', 'Alien vs. Predator', 'Planet of the Apes' and 'Night at the Museum', with additional film build outs to be announced at a later date;
• Retail merchandise and themed food and beverage outlets.

"People from around the world will gather here in Malaysia to become part of the story and to experience the magic and adventure of their favourite Fox properties."

Outlining how the theme park, spanning 25 acres at the Resort, will create new jobs, including cast members who will be trained to operate the rides and attractions, while representing the characters and stories from various Fox properties, Genting Malaysia Chairman and Chief Executive Tan Sri Lim Kok Thay stated "we are investing US$300 million to develop the world's first unique and compelling world-class Twentieth Century Fox Theme Park.

"Having the distinction of being the first of its kind in the world, Twentieth Century Fox World will be built on a grand scale that consists of unique and creative concepts featuring more than 25 rides and attractions of a cinematic nature. The theme park will definitely pave the way for continued growth of Resorts World Genting with a next-level family entertainment experience which will attract tourism dollars to Malaysia."

Explaining the market for the new attraction, Twentieth Century Fox Consumer Products Vice President of Global Location Entertainment Greg Lombardo added "the creation of a world-class entertainment destination in a vital market like Asia is a landmark step in Fox's global theme park strategy, extending our brand and engaging audiences in new and exciting ways."

With Twentieth Century Fox World targeting families and adults alike, the Resort anticipates a strong growth in visitors from Malaysia and international arrivals including China and Southeast Asia.

For more information go to www.gentingmalaysia.com