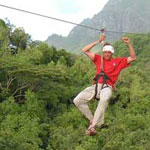 The park will include more than 100 kilometres of downhill mountainbike routes, a 1.8 kilometre-long chairlift for people and bicycles, 2 kilometres of forest zip lines, a mountain coaster and a restaurant and bar seating up to 180 people.

The forested 358 hectare site is owned by McVicar Holdings and would be leased to the developer for a 50-year term.

A statement from the company reported in The Press explained that the entire project is dependent on receiving resource consent, and if that is achieved, construction would start in March.

The project has received a $2 milliongrant from the New Zealand Government and would also be funded by a number of third party investors, including some who were New Zealand-based.

Canterbury Cycling Development Trust and Tourism New Zealand are two of the organisations to throw their support behind the project.

Tourism New Zealand Chief Executive Kevin Bowler said there was no facility in New Zealand that matched the proposed adventure park and it would work with the owners to market the facility internationally.

The Trust, which represents road, track, mountain, and BMX riders, said the facility would be an invaluable asset for the community.

As of last week, Christchurch City Council had received 640 submissions to the application, with 35 against.

Objectors, including local residents, are concerned about the increase in traffic and noise produced at the park.