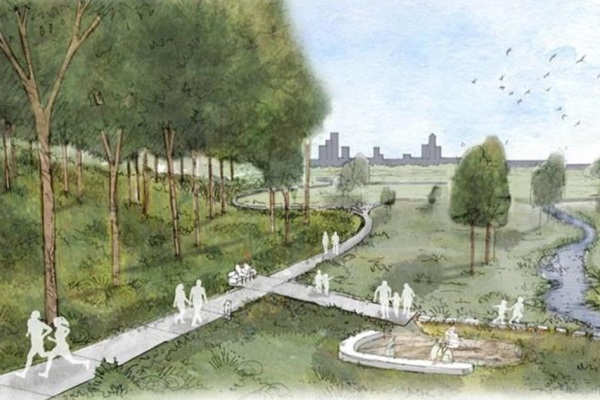 Gold Coast City Council has revealed early plans for a new park spanning an area of green open space roughly similar in size to Sydney’s Centennial Park and six times bigger than the Gold Coast’s Broadwater Parklands, that it says will be the most important public space in the city.

Spanning over 220 hectares from the suburbs of Robina to Carrara, initial plans for The Greenheart project include rejuvenated wetlands, 15 sporting fields, an event space for 25,000 people, as well as a variety of informal leisure areas with cafes, a wedding venue and playgrounds.

The site identified in the draft preliminary masterplan would need to be regenerated and transformed to meet the stated goals of the project, with the Council advising that this would involve “the largest urban biodiversity reforestation project in Australia,” that would create a “unique urban forest, wetlands and waterways, which will be a mecca for native wildlife.”

Mayor Tate suggested the park will have a similar vibe to New York’s famous Central Park and be the most important open space project this city will deliver in a generation, adding “you can go and listen to buskers here, you can go and feed the swans over there, or you can go and have a cup of coffee in the park.

“They’re the elements that we want to have here on the Gold Coast, and, unlike New York, we will have koalas!” 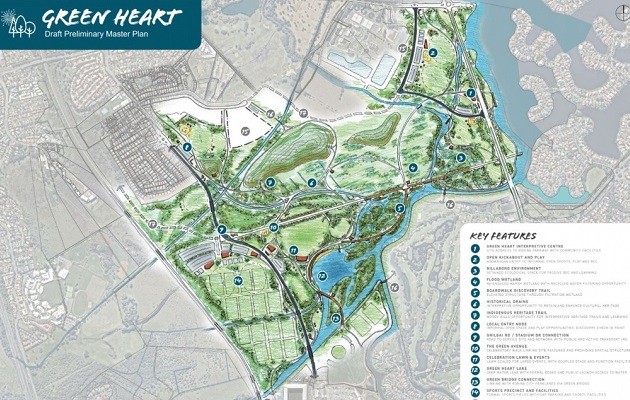 It’s claimed the sports precinct in the park will also “ease pressure on local sports clubs” and provide for school sports competition in a central area.

Mayor Tate went on to say “each year, an additional 12-15,000 residents choose to call the Gold Coast home and by 2050 this city will need to provide sporting facilities for an extra 20,000 participants each week.”

The draft preliminary masterplan states “Greenheart will be a unique urban forest with large areas of native forest, wetlands and waterways, which will be a mecca for native wildlife.”

More details will be available once the plans have been presented to the council at its first meeting following an election on 28th March.

If approved, construction would be likely to begin within the next three years.

The creation of the Robina City Parklands, currently underway, would form the first stage of the Greenheart project.

Images: An artist’s impression of the new Greenheart park area (top) and a plan of the proposed area (below). Images courtesy of City of Gold Coast.