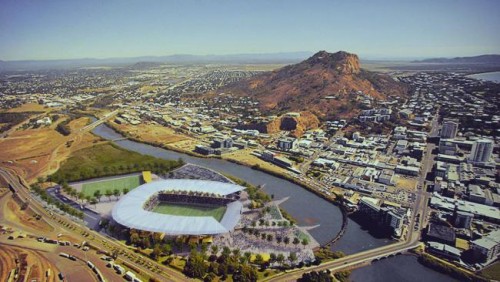 With calls for the next Federal Government to back the development of a new Townsville Stadium having emerged as a key election issue in the marginal constituency, a benefit cost ratio (BCR) analysis has suggested that the venue is not financially viable and will cost taxpayers half a billion dollars in its first 30 years in operation.

While Labor leader Bill Shorten has promised $100 million for a new Townsville Stadium - to match the state Queensland Government's $100 million pledge - the Australian Financial Review has reported that the project wil not deliver a positive BCR.

A positive BCR - where the benefits outweigh the costs - is required to receive any funding from Infrastructure Australia.

The new 25,000 seat stadium in Townsville - which would only have an estimated 13 event days a year for home games for the North Queensland Cowboys - received a rating of 0.214 in the Queensland Government's business case to Infrastructure Australia, obtained by the Australian Financial Review.

The business case prepared by the Queensland Department of State Development - which has never been publicly released - has led critics to suggest that Shorten's support for the stadium, which would replace the current 1300Smiles Stadium, as a ‘stunt’ aimed at attracting votes.

The business case, which was signed off by the Queensland Government in November, found the capital cost of a new stadium was likely to be $250 million (other estimates have been $380 million, ed), but the full cost of the stadium over 30 years would top $530 million in 2015 dollars.

A stadium with an integrated 5,800-seat entertainment centre, as preferred by the Townsville City Council, would cost $380 million to build, but cost $785.3 million over the same timeframe.

The sensitivity analysis found the net benefit of the Stadium - the difference between the present value of the total benefits and the costs - was a $170 million loss.

However, the report argued that the economic position would improve if the stadium had multiple tenants.

The business case noted public stadiums struggled to deliver a financial return to state or local governments, but there would be wider economic and social benefits for the city.

It explained “notwithstanding the low BCR, the business case noted that the best-practice regional stadium offers significant potential for the catalytic development in Townsville, providing activation of the surrounding area and favourable community benefit uplift.”

The document said despite the stadium not being financially viable there were a number of social and community benefits, including "increased levels of social cohesion and well-being in the community".

Backing calls for funding, the North Queensland Cowboys have warned they may be forced to leave Townsville within five years if the stadium is not built.

Image shows an artist's impression of the planned venue.