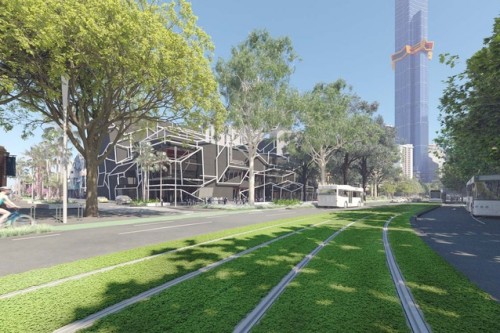 A draft concept plan for the development of a new linear park along Melbourne’s Southbank Boulevard has been released.

Designed by the City of Melbourne’s City Design Studio, the planned space connects the Domain Parklands to the Yarra River and will be freed up by converting a car lane on Southbank Boulevard.

It will be flanked by some of Victoria’s most significant cultural institutions, including the MTC Theatre and the Melbourne Recital Centre, both designed by Ashton Raggatt McDougall, the recently completed ABC Centre, the National Gallery of Victoria designed by Roy Grounds and the Victorian College of the Arts.

Traffic on Southbank Boulevard has dropped steadily over the past few decades following the construction of Queensbridge Square in 2001, despite Southbank’s status as the most densely populated suburb in greater metropolitan Melbourne. More than 92% of residents in the suburb live in high-rise apartments, according to a community engagement summary released by the City of Melbourne in 2016.

The area is also one of the city’s most deprived when it comes to the provision of green space. With the recommended per-person provision for green space in Melbourne at 22 metres², in Southbank, there are approximately 3 metres² per person.

The plan suggests that “green” tram lines could be installed along the existing tracks. 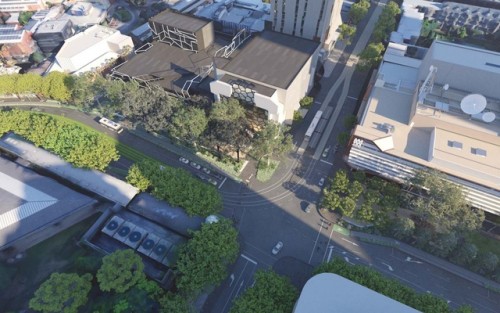 Lord Mayor Robert Doyle said that the public space created in front of the new ABC headquarters alone will be larger than Melbourne’s City Square.

Having previously set aside $11 million in its 2017/18 budget to develop the park, an announcement accompanying the release of the draft concept plan put the cost of the project at $35 million.

At the time of the budget announcement, a spokesperson for the City explained that the decision to convert an existing car lane into the new park was made in part because purchasing the equivalent land would cost approximately $140 million at a cost of $7,000 per metres².

Plans to consolidate the road were present in the Melbourne Arts Precinct Blueprint released in 2014 by the Victorian Government.

The plans also show that the intersection of Southbank Boulevard and Dodds Street will be redeveloped for use as a multi-functional events space.

1.05 kilometres of dedicated cycle lane will also be installed as part of the redevelopment, in addition to significant planting and a new children’s play space.

The City of Melbourne will vote on the draft concept plan on 18th July.

If agreed, it is anticipated that the project will be completed in 2020.