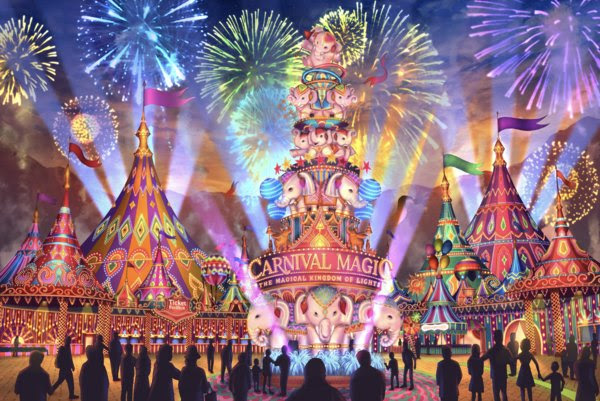 Phuket FantaSea has celebrated its 20th anniversary with the grand opening of the world's first Thai Carnival Theme Park in Thailand. Built with a budget of over US$160 million and covering an area of more than 40 acres, Carnival Magic aspires to become an exciting new landmark tourist destination in Asia and is expected to attract over 1 million tourists per year with annual revenue of no less than US$50 million.

Zone 2 - Bird of Paradise Restaurant: A fully air-conditioned gala buffet restaurant that can accommodate over 3,000 visitors and is reached by passing through an enchanted Garden of Paradise entranceway.

A special feature of this restaurant is that guests will first arrive at a waterfall known as 'Happiness Falls' and ascend to the restaurant via a mystical barge called the 'Barge of Happiness' which rises approximately 7 meters to deliver guests into this uniquely themed restaurant.

Zone 3 - River Palace Theater: The River Palace Paradium is a parade stadium presenting the first ever production show of its kind in the world. Offering seating for approximately 2,000 guests and featuring a performance stage 70 meters long and 22 meters wide, the entire building measures over 200 meters in length, making it one of the largest theaters ever constructed in the world.

With production features such as aerial ballet, animatronics and gigantic creatures, and a cast and crew of over 300 on one of the largest stages ever built, the River Palace Parade highlights the very best of Thai culture in an original new presentation.

Zone 4 - Kingdom of Lights: An enchanting world of sparkling gardens and breathtaking landscapes beautifully decorated with over 40 million lights. The main highlight of this zone is the 'River of Lights' which features luminaries laced with tens of millions of lights, over 50 kilometers in length overall, and best observed by crossing a dazzling lake-spanning bridge offering a panoramic view of the entire illuminated zone.

The Carnival Magic project will be officially opened in early 2020.

For more information go to http://www.carnivalmagicpark.com