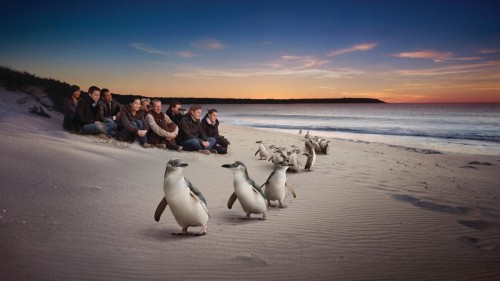 Phillip Island’s penguins have over the last week gained the attention of a worldwide audience with unprecedented global media coverage.

This video has since gone out to an audience of over 400 million people worldwide, acquired over 54.2 million unique views, and has been shown in over 20 countries including UK, US, France, India, Canada, Brazil, Finland and more, and continues to be shared on social media.

3AW broadcaster Neil Mitchell told his Melbourne audience after playing the videos’ complete audio twice on his radio show that “this funny video may give Victoria a much-needed tourism boost when international travel resumes…this will be one of the greatest promotions you’ve ever seen for Phillip Island’’.

The week was book-ended by Tourism Australia’s Live from AUS campaign, which featured live crosses over the whole weekend to destinations and experiences round Australia, with the Penguin Parade featured as the only Victorian tourism attraction among a host of iconic Australian destinations such as Uluru and the Great Barrier Reef.

Tourism Australia’s team put together a fun bedtime story for the Penguin Parade live-cross at 6pm last Sunday night (17th May 2020), narrated by Michael ‘Wippa’ Wipfli. The video has already amassed over 530,000 views, and more views are sure to follow, as Tourism Australia continues to promote this campaign to their audience of 12 million people all around the world.

Phillip Island Nature Parks continues to plan for, and looks forward to, welcoming visitors back to its nature-based experiences when the time is right, and showcasing the Island’s unique wildlife and stories of conservation success.