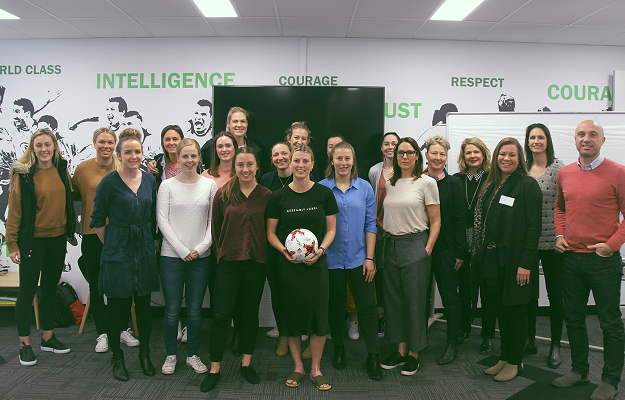 Professional Footballers Australia has this week assisted Australian female players and administrators with governance foundation training, helping to advance their careers off the pitch.

Delivered by the Australian Institute of Company Directors (AICD), the course was held at the PFA’s offices in West Melbourne

The course equips participants for future board directorships and leadership positions within sport, providing foundational skills for board members with a focus on the responsibilities and potential liability of a director or committee member.

Advising that the course had been invaluable for female athletes in current board positions, while inspiring the next generation of leaders, PFA Deputy Chief Executive Kathryn Gill stated “there is always a conversation about having more women in leadership roles and equipping them to be able and capable to fulfil those roles.

“For us it was about identifying those leaders and actually giving them the skills to allow them to fulfil those leadership roles, while helping to add to the pipeline of talent that we have to ensure they are confident and capable and are in a position to become a leader in the future.”

Medhurst, who has been the President of the ANPA for the past 10 months, said that the course had provided and additional level of competency for her to represent her sport and athletes.

She advised “it’s given us great insight and understanding of the legalities and practicalities around governance positions. I’m really passionate about the direction of our sport and hopefully I can play a key role in progressing it forward for the players."

Capital Football board member Grace Gill said that the opportunity to learn the course material alongside female athletes and administrators had been inspiring.

Gill concluded “the last couple of days have been fantastic. I find it’s always a really great learning opportunity to sit in a room full of not only like-minded people, but people from the sporting industry.

“It’s really inspiring that our players’ association is willing to invest in what is the future of players post-career and identify that after sport there are other avenues, whether that is governance, administration or media, to pursue.”

The PFA will also provide ongoing support and advice to the participants to ensure continued personal and professional development.

PFA secured funding from Sports Australia through the Women Leaders in Sport (WLIS) program to deliver the course earlier in 2019.