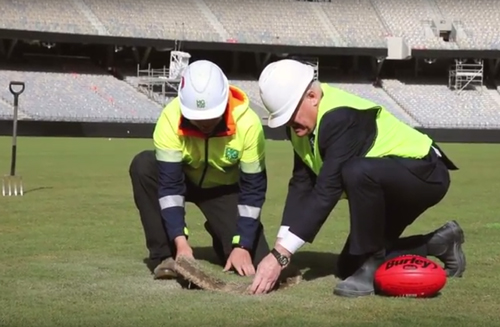 Installation of the turf onto the Perth Stadium playing surface is now complete marking another step towards completion of the 60,000-seat venue in early 2018.

With the installation of the Eclipse® Stabilised Turf system having commenced on 1st August, Western Australian Minister for Sport and Recreation, Mick Murray, and a representative from the turf supply and installation contractor, HG Sports Turf, laid the final piece yesterday.

The turf is a combination of natural couch grass woven with artificial turf, which provides outstanding durability and stability. The same turf is successfully used at other stadia in Australia and overseas including the Melbourne Cricket Ground (MCG), Eden Park in Auckland and Perth’s nib Stadium.

A total of 18,000 metre² of turf was grown at a local turf farm in Serpentine and was delivered to site in one-meter wide x 10m long sections. The turf was installed using a three-tonne roller and was trimmed to fit the Perth Stadium playing surface.

While ready to play, the playing surface will be monitored and maintained until the Stadium opens in early 2018 and then throughout operations.

Growlight rigs will be used as part of the maintenance program and will be positioned on the northern portion of the turf during the winter months supporting the winter sun. Replacement turf will also be grown and maintained off site for use when required.

Designed and constructed by HG Sports Turf, the playing surface has taken around two years to grow and has been designed to ensure maximum durability, with Perth Stadium set to host a range of sports and music concerts.

The turf will be protected when concerts, including the two Ed Sheeran concerts in March 2018, are held or when drop-in seats are used for rectangular events.

The turf was grown by Greenacres Turf Group, whose Director Peter Pitsikas told The West Australian earlier this month “there won’t really be a home ground advantage because we’ve done AAMI Park, the MCG and ANZ Stadium.

“If you looked at it, you couldn’t tell the difference (between 100% natural grass), but it’s a very durable, uniform consistent surface.”

Construction of Perth Stadium and the surrounding Stadium Park is over 90% complete and remains on schedule to open in early 2018.

It has not yet been confirmed which sport will christen Perth Stadium.

Click here to view a factsheet on the playing surface.