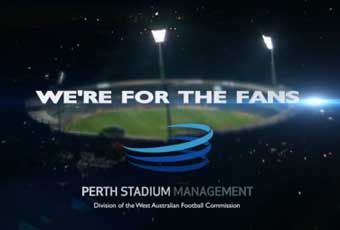 Promising "a new era in stadium management" and with the backing of range of entertainment and sport industry heavyweights, Perth Stadium Management has been launched.

Initially, the four Perth Stadium Management partners will work together to provide management and other services to Perth's Domain Stadium along with a new activity of providing staffing services to the WACA Ground on game days.

However, it is expected that Perth Stadium Management will bid for management contracts at other venues, potentially including the WACA, nib Stadium in East Perth, Perth Theatre Trust venues and a potential bid to run the new 60,000-seat Perth Stadium.

Competing with the likes of rival venue manager AEG Ogden, which runs the Perth Arena on behalf of the Western Australian Government, Perth Stadium Management may also look to run venues in other States and internationally.

Management of the new venture will be overseen by an Advisory Board comprising senior representatives of its global partners and other independent Board members.

The inaugural members of the Advisory Board are:

Commenting on the venture, Advisory Board Chairman Murray McHenry said Perth Stadium Management was a strong team of stadium and entertainment experts who would deliver local leadership with global capability in stadium management.

McHenry stated “our goal is to provide great experiences for fans at sports and entertainment events by delivering world-class stadium management services.”

He added “the WAFC’s goal is to diversify its revenue streams in Western Australia to help secure the future of football in our community, while our partners also seek to grow their specialist businesses in a dynamic part of the world.”

Delaware North is one of the world’s largest privately owned companies. A Fortune 500 company, after nearly a century in operation it is still owned by the Jacobs family. Delaware North has US$3 billion in earnings per annum and is involved in 200 stadium venues world-wide.

In Australia it is involved in Etihad Stadium, Melbourne; the Sydney Cricket Ground and Melbourne & Olympic Parks.

Ticketmaster Australasia is the local arm of Ticketmaster International, the world’s leading event ticketing company, and provides state-of-the-art ticketing, marketing and entry management solutions to a wide variety of venues and events in Australia and New Zealand.

Ticketmaster offers a range of flexible solutions for distribution of tickets including a Print-at-Home service that allows customers to easily access their tickets via the internet.