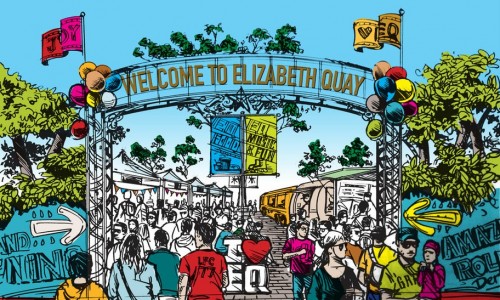 West Australians and visitors will be treated to a spectacular display of lasers, lights and water fountains when Perth's new Elizabeth Quay precinct opens to the public on Friday 29th January 2016.

The free show will light up the inlet at 8pm, 9pm and 10pm to coincide with a weekend of entertainment and performances from the hugely successful Fringe World Festival.

Onsite yesterday (16th December) to mark the completion of the pedestrian and cyclist bridge, Western Australian Premier Colin Barnett said the show would create a stunning outdoor display that showcased the inlet as the heart of the Elizabeth Quay development.

Premier Barnett stated “the laser and light show will combine different visual effects with dozens of water fountains across the inlet; it will be Perth’s biggest ever water show.”

“Oracle Liquid has an international reputation for developing innovative and exciting shows and this one will be unique to Perth.

“In less than two months from now, visitors will be able to run, cycle or even ride a Segway across the bridge as they wander around the promenades and explore the many activities, events and attractions on offer. This precinct is for all West Australians and I encourage you to take advantage of what’s on offer.”

A new partnership with Fringe World will see the festival host an extended season in the precinct from 29th January to 6th March 2016.

Western Australian Planning and Culture and the Arts Minister John Day said festival organisers would recreate the original fairground which was located at the riverside end of William Street in the 1920s, adding “Elizabeth Quay provides the perfect backdrop for an opening weekend of carnival fun, family friendly activities and plenty of entertainment.”

“The Fringe World Fairground will feature an eclectic mix of performance, theatre and music including roving fairground acts, an outdoor roller skating rink, carnival rides and amusements, food and drink and lots more.

“Alongside the Perth International Arts Festival, Fringe World is the perfect way to begin an exciting calendar of events which will showcase Elizabeth Quay as Perth’s leading entertainment and leisure precinct.”