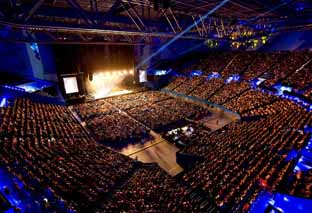 Venue Manager, AEG Ogden has hailed the successful opening of the new Perth Arena with the promise of more to come.

The Arena's General Manager, Steve Hevern today praised the entire Perth Arena team which helped to deliver a memorable night of entertainment headlined by Sir Elton John and his band, who rocked a packed house.

The show, billed as 'Under The Stars' was to be played with the retractable roof open, but Perth's weather was not accommodating, with rain showers throughout the afternoon and evening leading to it being closed for the entirety of the night.

But the stunning arena, one of the most spectacular looking and appointed venues in the world, shone brightly and showcased its excellent acoustics in a landmark night of entertainment for the city.

"As is the case with any opening nights, there were the usual last minute surprises and challenges but nothing we couldn't meet. To quote the adage, the show must and did go on. I was delighted with how the night played out," Mr Hevern said.

Over the next couple of months, Perth Arena will host a schedule virtually unmatched in terms of quantity and quality for a new venue.

Last night, the arena hosted Matchbox Twenty and tonight, Sir Elton and his band will perform a second show. The Perth Wildcats play their first home game on Friday (16 November) followed the night after by Nickelback.

Mike Tyson's 'Day of Champions', The Wiggles 'Celebration Tour', Reece Mastin, Russell Brand, Jennifer Lopez and Nicki Minaj will round off an exceptional opening period line-up of entertainment leading into the Hyundai Hopman Cup. 2013 already has shows on sale from a number of superstars including P!nk, One Direction, Black Sabbath, The Script and Neil Young.

Hevern stressed the importance of delivering world-class quality entertainment that suited all tastes and ages and the role that AEG Ogden plays in that endeavour.

He added "Perth Arena is an important member of the AEG Ogden arena network. AEG Ogden's network of contacts within the entertainment industry has been instrumental in delivering a wonderful opening event roster and will continue to help procure quality acts for the Western Australian public.

"In the past, Western Australia has missed out on some acts when touring the country, but that is about to change. No longer can they use the excuse that Perth doesn't have the venue to meet their requirements.

"We will certainly be reminding promoters when planning future tours that Perth now has a state of the art, world-class venue and we want their artists to perform here."

Hevern said the overall response from event patrons, hirers, suppliers and the wider corporate marketplace leading up to last night's official opening had been overwhelming, concluding "demand has simply been unprecedented for our overall commercial programme. We are very much looking forward to working with the Western Australian corporate market and enhancing our partnerships to ensure that their marketing and hospitality objectives are met.

"We are also organising a wide range of venue corporate functions from both the public and private sectors.

"The high level of public interest and strong ticket sales tell us that Western Australians have embraced the Arena and there is much for them to look forward to and be excited about."

Sitting within the new Northbridge Link precinct, the Perth Arena forms an integral part of the Perth CBD revitalisation project as an iconic building for the people of Perth and Western Australia, attracting premium entertainment, sporting and cultural events. The 15,000 capacity, state-of-the-art arena has been designed to maximise flexibility, and features a permanent tennis court surface, retractable roof and 36 corporate suites. The Government of Western Australia has vested the ownership of the Perth Arena in VenuesWest, which has engaged AEG Ogden to manage the venue.

For further information go to www.venueswest.wa.gov.au